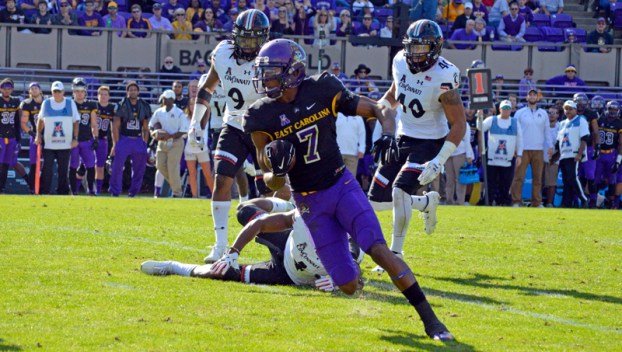 Zay Jones hauls in a pass against Cincinnati last season. He had 22 catches in Saturday’s loss at South Carolins, which broke the ECU record previously held by Justin Hardy.

COLUMBIA, S.C. — Freshman Brandon McIlwain got his first start and played the whole game, but it was South Carolina’s defense that carried the Gamecocks to a 20-15 win over East Carolina on Saturday.

South Carolina picked off a pass and recovered a fumble in its own end zone and had another interception at the Gamecocks 1 a week after Muschamp suggested they didn’t like to tackle. The Gamecocks (2-1) also blocked a field goal to make a 17-0 lead they sprinted out to in the first seven minutes stick.

Zay Jones caught 22 passes for East Carolina (2-1), setting a school record. He was one reception away from the Football Bowl Subdivision record of 23 receptions. But South Carolina coach Will Muschamp noticed what he thought was a more important statistic — Jones had just 190 yards receiving.

“His long was 15 (yards),” Muschamp said smiling after he won his home opener with South Carolina.

McIlwain ran for 34 yards and two touchdowns and was 16-for-28 for 195 yards. Muschamp said after the game that he is turning the offense over to his freshman full time.

East Carolina gained 519 yards to just 312 yards for South Carolina. But Muschamp said that doesn’t matter in the end.

“I don’t look at the stat sheet and see how many yards they have. I only care about the score,” Muschamp said.

The Pirates turned the ball over four times and, after committing just seven penalties in their first two games, committed eight penalties Saturday.

“What I saw in this game is too many penalties. What I saw was too many turnovers.  I saw a team that outgained another and a defense that outplayed the other defense. We didn’t pull it through at the end,” East Carolina coach Scottie Montgomery said.

EAST CAROLINA: The Pirates have no one to blame but themselves. They allowed a South Carolina team that hadn’t scored a point in the first half in its first two games to jump to a 17-0 lead after an 80-yard kickoff return by A.J. Turner to set up the game-opening score and an 84-yard drive on the Gamecocks’ second possession. Philip Nelson was 44-for-58 for 400 yards, but South Carolina had four sacks as he sometimes stayed in the pocket too long.

SOUTH CAROLINA: The Gamecocks appear to be ready to make McIlwain their future although he looked like a freshman at times with several underthrows and overthrows. But he put two passes in just the right spots on a key fourth-quarter drive that ended with a 39-yard field goal from Elliot Fry — South Carolina’s only points in the final 52 minutes of the game. The freshman also made a key choice, pitching to David Williams on a fourth-and-1 option that sealed the win.

EAST CAROLINA: The Pirates finish a run of three straight games against Power 5 opponents by traveling to Virginia Tech. East Carolina has beaten the Hokies the past two years and Montgomery expects his team to shake off this loss quickly.

“We don’t look at moral victories. We’re going back to work,” said Montgomery, hired at the end of last season.

SOUTH CAROLINA: The Gamecocks play at Kentucky. It’s likely the loser ends up near the bottom of the SEC East.