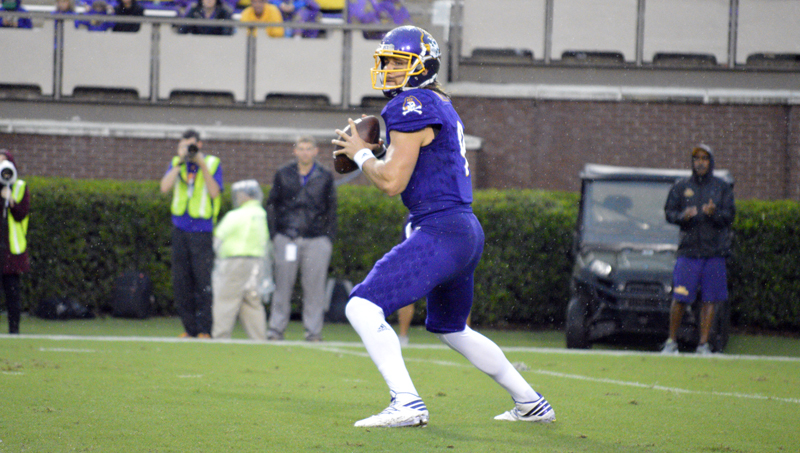 Philip Nelson steps back in the pocket in ECU’s season opener against Western Carolina. Nelson threw two interceptions in the end zone Saturday afternoon at South Carolina. The defense kept the Pirates in the game, but the offense failed to earn any points in four-of-six red zone trips.

GREENVILLE — East Carolina head coach Scottie Montgomery is a firm believer in General Robert Neyland’s “Seven Maxims of Football.” On Saturday, Montgomery and his Pirates broke the No. 1 maxim en route to a 20-15 loss.

“The first one is the team that makes the fewest mistakes will win,” Montgomery said at Monday’s press conference. “That’s what happened in that game. We talked about some of the penalty discipline after the game but the four turnovers would prove to be critical.”

The Pirates had two interception and two fumbles on the day, one of which came from senior quarterback Philip Nelson. But, it was where the turnovers came on the field that is perhaps the most concerning aspect of ECU’s loss.

Running back Anthony Scott fumbled the ball near South Carolina’s goal line, and Nelson added two interceptions in the end zone, both times looking wildly inaccurate. All said, in turnovers alone, ECU left at least nine points on the board. If all possessions were converted into touchdowns it could have been 21 points.

“I don’t even know if I’ve even watched one where that happens,” Montgomery said of the costly turnovers. “It hurts, but it helps that, despite all of that going on, our team was a tough enough, physical enough and overall good enough football team to win it, but unfortunately we did not do that. I hope that’s the last time I experience a game like that unless it’s for the other team. “

The stat sheet paints a very different story than a narrow Gamecocks victory. The Pirates gained 21 more first down than South Carolina, ran 38 more plays and accumulated 207 more yards. But ultimately, the Pirates failed where it matters most, finishing just 2-of-6 red zone attempts, including a missed field goal from senior kicker Davis Plowman.

ECU senior receiver Zay Jones had a career day, catching 22 passes for 190 yards, propelling the Pirate offense to 519 total yards of offense. On the other side of the ball, Jordan Williams led a defense that held the Gamecocks to just 312 yards. Even after a 17-point first quarter, the Pirates held their opponent to just three more points throughout the contest. Still though, it wasn’t enough to overshadow the mistakes that doomed ECU.

“When you lose a game like this, you can see the reasons why you lost,” Montgomery said of the penalties. “When you lose games, guys want to look around and figure out why we lost. Well this week it was very clear.”

The coach and his staff will have plenty to correct in film sessions this week. However, not every mistake is correctable just by making a better read or being more aware. Montgomery stressed the importance of taking care of the football from a physical standpoint — something that Nelson failed to do on both of his interceptions and Scott neglected on his goal-line fumble.

“Coaches really harp on mental errors,” Montgomery said. “But players, they have a physical error where we turn the ball over from a fumble or we don’t make the throw as early or as hard. Those are physical errors and sometimes they sit with the players so they were anxious to get back into practice.”