ECU hopes to bounce back at Virginia Tech 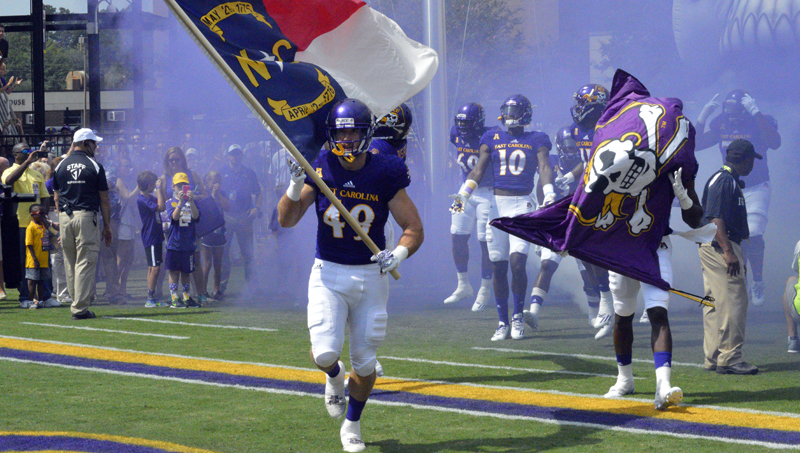 Senior receiver Brian Hardy storms out of the tunnel waving the North Carolina state flag prior to ECU’s showdown with N.C. State. The Pirates committed numerous mistakes at South Carolina last week. They hope to respond from that loss with a road win at Virginia Tech.

BLACKSBURG, Va. — Just a week removed from an error-filled loss to South Carolina, the Pirates head to Blacksburg, Virginia to play Virginia Tech. They have hopes of correcting mistakes and winning their seventh straight contest against Atlantic Coast Conference foes.

“It’s about being disciplined and making sure we’re not making any mental errors,” running back Anthony Scott said. “We know what we’re doing. We need to play well and execute to the fullest.”

Riding a two-game winning streak over Virginia Tech (2-1, 1-0 ACC), East Carolina will put its 2-1 2016 record on the line, hoping to get back on track and pick up some much-needed momentum going into American Athletic Conference play.

Standing in ECU’s way, however, is first-year Hokie head coach Justin Fuente and renown defensive coordinator Bud Foster. Fuente, who helped turn around Memphis before taking over for longtime Virginia Tech head coach Frank Beamer, last faced the Pirates in 2012 in a 41-7 loss.

Things are different for Fuente this year, though. With Foster on his staff and 12 seniors, the Hokies provide a unique challenge for the Pirates. ECU head coach Scottie Montgomery got first-hand experience against Foster during his time as the offensive coordinator at Duke. He knows what to expect. Saturday’s game could very well be a chess match between the Pirate offense and the Hokie defense.

“He just mixes it up,” Montgomery said. “Over the last eight to nine years that I’ve been able to see his defense since I was going against him, he does a good job of changing it up. We have to be ready for the adjustment. It hurts that I’ve gone against him because he knows our adjustments in certain situations, and hopefully we’ll be able to know some of his.”

Foster and his defense have allowed 58 points this season through three games, but 45 points against came against Tennessee in Week 2. Outside of that performance, however, the Hokies held Liberty to 13 points and shutout Boston College last weekend.

“They do a really, really good job offensively, defensively and on special teams,” Montgomery said. “Any time you hold a team like Boston College to a scoreless game, then you know you’re playing a good football team.”

Junior linebacker Andrew Motuapuaka and senior defensive back Chuck Clark, whom have 29 and 20 tackles, respectively, lead the Hokies’ staunch defense. They have been key components on a defense that has held opposing teams to just a 20 percent success rate on third-down conversions.

For the Pirates to counteract Foster and his defense, offensive coordinator Tony Petersen will need to have a bounce-back performance from senior quarterback Philip Nelson. Nelson turned the ball over three times last week against South Carolina, and the Pirates shot themselves in the foot on their way to a 20-15 loss on the road. The pieces around Nelson need to bounce back, too.

“It’s going to be a challenge for us,” Petersen said. “We’ve got to find a way to run the football. We’ve got to make sure we protect our quarterback and we have to make plays happen down the field because they’re going to give us a lot of man coverage.”

The loss to South Carolina likely provides plenty of motivation, but Montgomery emphasized the need to correct mistakes and deal with loud noise going into another tough road environment. ECU has utilized crowd noisemakers in practice to ensure the players are prepared.

“It will be loud again,” Montgomery said. “I hate it for all of our neighbors (close by) here. When we’re on the road, we have to have that noise. (The players) did do a good job. I thought our snap count was good for a majority of the day.”