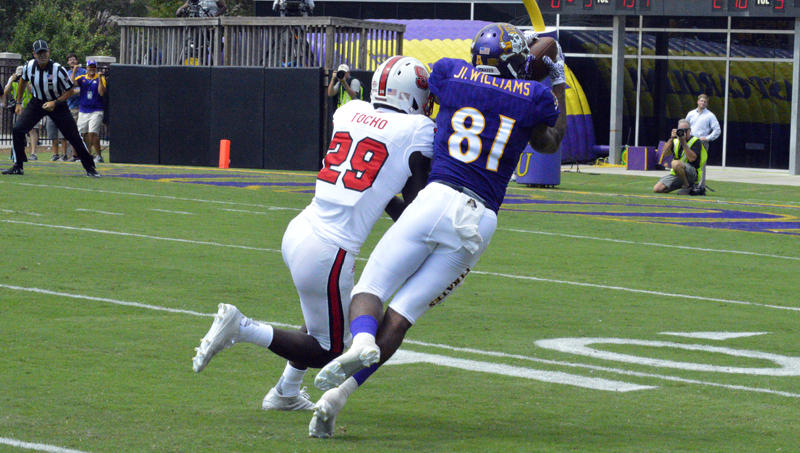 Jimmy Williams dives as he makes a catch against N.C. State. He had two long touchdowns — East Carolina’s only ones of the game — as the Pirates were blown out by Virginia Tech.

BLACKSBURG, Va. — The East Carolina football team was looking for a bounce-back performance after a disappointing 20-15 loss to South Carolina, but instead saw its six-game win streak against the Atlantic Coast Conference come crashing down against Virginia Tech.

The Pirates’ special teams failed them from start (an 87-yard punt returned for a touchdown) to finish (a muffed punt with 2:25 left in the game) as the Hokies blew the Pirates out with a final score of 54-17.

ECU’s longest drive of the first half was 10 plays for 73 yards, and ultimately resulted in the blocked field goal. The Hokies were gifted great field position all day and they converted often.

Tech quarterback Jerod Evans had a strong first half and connected on long throws. He completed a 24-yard thread-the-needle pass over cornerback Corey Seargent to Isaiah Ford to put VT up 21-0.

Later in the half, he connected with Cam Phillips from 55-yards out to get Tech out to its 38-0 lead with 1:05 left in the half.

Former Washington quarterback Jimmy Williams put the first points on the board for ECU on the first play of the second half. Quarterback Philip Nelson connected with Williams down the left sideline for a 75-yard touchdown.

Williams accounted for the only touchdowns on the day, in fact, as he and Nelson hooked up again late in the third quarter, this time from 70 yards out.

ECU added a field goal by freshman scholarship kicker Jake Verity with 6:32 left in the fourth quarter, but the early lapses were too much to overcome for the Pirates.

The Pirates had a two-game win streak against the Hokies, but saw it snapped in the blowout.

Nelson was heavily pressured by Tech’s defense and had little time to throw. Still, he completed 17-of-34 passes for 362 yards and the pair of touchdowns. Though Williams led the way in yards (179 on three receptions), Zay Jones was again the most used target. He hauled in game-high 10 passes for 115 yards, including five in the first quarter alone.

Running holes opened up in the second half as the Hokie defense let off a bit, and Anthony Scott finished with 69 yards on 14 carries.

James Summers was used often early in the game and he carried the ball 10 times for 34 yards. In the third quarter, Summers was hit hard for a safety to give VT a 40-7 lead at the time. He played little after the play.

The Pirates will have a week to prepare for their first conference game of the season against Central Florida. ECU and the Knights will square off in Greenville next Saturday at noon.