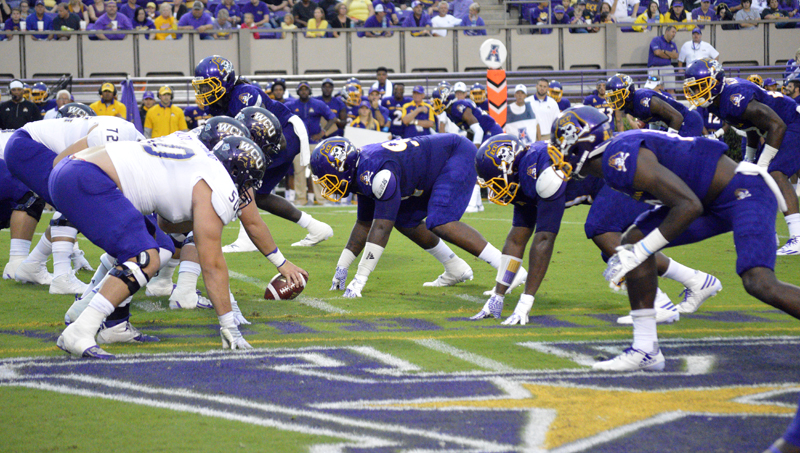 ECU’s defense squares off against Western Carolina in the season opener. The Pirate secondary struggled at times even against their Week 1 FCS opponent. They’re looking to limit big plays from here on out.

Once thought of as the deepest, most experienced unit on the defense, East Carolina’s secondary now faces the challenge of making a mid-season adjustment to limit explosive plays.

Defensive backs coach Rick Smith calls his group the last line of defense. With four upperclassmen starters, including two seniors, the Pirate secondary should be more than capable of preventing big plays in both the run and pass game.

That simply hasn’t been the case for ECU in either category.

“The key for us is getting lined up before the snap,” Smith said. “That’s always the key. If the secondary plays well, you’ve always got a chance to win. If you’re giving up 60-yard passes and 60-yard runs because of the secondary, you’re not going to be very good.”

Opposing defenses seem to be picking on boundary corner position, which has rotated between senior DaShaun Amos, junior Bobby Fulp and freshman Colby Gore. Amos, the team’s nickel, and Fulp, the backup strong safety, have been called on to relieve Gore of the some of the pressure at that position.

From Week 1 against Western Carolina, Gore has been picked on by opposing defenses and to seemingly good results. Still, though, Smith is electing to start Gore against Central Florida, citing the freshman’s good week of practice.

“I’ve been playing him some, but he’s a freshman and I didn’t want to throw him to the wolves too quick,” Smith said. “If you put a young guy out there too early and it goes bad, he loses confidence and he’s out for the whole year.”

The three other secondary positions are solidified, with field corner Corey Seargent, strong safety DaShawn Benton and free safety Travon Simmons. With the rotation at the boundary spot, players admitted that communication between the group can be thrown off.

“There’s a little bit of a challenge, but honestly you have to just embrace it and communicate with them,” Simmons said.

Perhaps it makes sense to point at the rotating spot as a contributing factor in the Hokies’ explosive plays through the air. But Smith looks at his defensive, man-first philosophy as the biggest reason for the deep passes.

“We understand that when we line up and press a guy what the quarterback’s going to see,” Smith said. “Guys that do what we do, sometimes you’re going to give up a deep ball, but you have to play the next play.”

Benton, the senior safety, let receiver Cam Phillps get behind him for the 55-yard touchdown pass, leaving the deep middle of the field wide open. A senior getting burned deep down the middle highlights a serious concern moving forward, even if it was against an explosive offense.

“We have to limit those deep balls,” Simmons said. “If we do that, I know we can be one of the best secondarys in the country.”