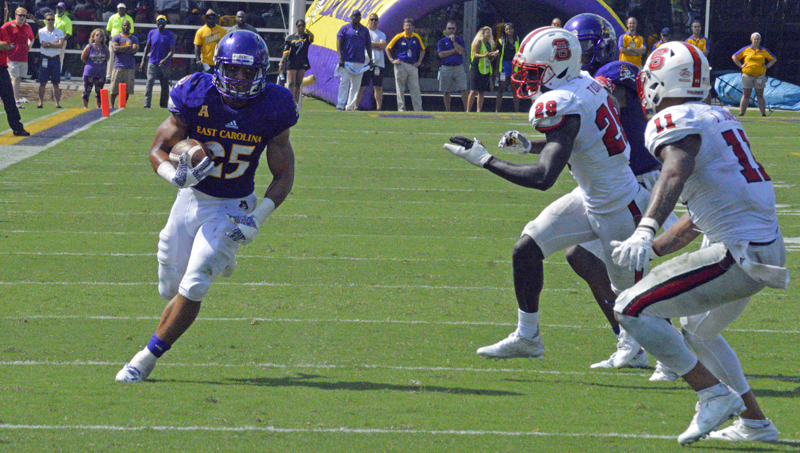 Running back Devin Anderson receives a pass from Philip Nelson and takes off down the left sideline. Anderson and the Pirates picked up their last win at home against in-state rival N.C. State. ECU hopes it can get off to a strong start in American Athletic Conference play at home against UCF on Saturday.

GREENVILLE — It’s been a week of regrouping and learning from last week’s mistakes for the East Carolina football team, which is set to host Central Florida Saturday to kickoff American Athletic Conference play.

“There is just a ton of more energy,” ECU’s own first-year head coach Scottie Montgomery said. “He’s coming off a situation where they weren’t familiar with what it was like to win. He brought in a lot of music in practice, a lot of high-tempo and next play (mentality).”

Montgomery sees similarities between the two programs, both of which are coming off disappointing 2015 seasons. Under new leadership in 2016, Montgomery said being able to have a “nothing to lose” mentality is a special thing for a college football team.

“When it’s all new and everyone understands that there’s nothing to lose, it’s a great, great feeling, a lot like the one we have here,” Montgomery said at Monday’s press conference. “We love the situation that we’re in here.”

The Knights had the AAC Rookie-of-the-Year in freshman wide receiver Tra’Quan Smith last year, one of the few bright spots on a weak UCF team. Now, a new pair of true freshmen are helping lead the offensive attack for the Knights along with Smith.

Quarterback McKenzie Milton and running back Adrian Killins have been key cogs in Frost’s new offensive attack. In last week’s 53-14 blowout of Florida International, Killins carried the ball six times for 86 yards, 61 of which came on a monstrous third-quarter touchdown run. Milton was 8-of-14 with 174 yards and carried the ball for another 28 on the weak Panther defense.

Milton is only 5-foot-11, but his mobility and ability to make plays on the run is critical to his game. Sophomore cornerback Corey Seargent said his job becomes much more critical with a quarterback that can move.

“It’s all about staying in coverage,” he said. “When a quarterback is mobile, the receiver will go off his route a lot to try to get open. We have to just stay out there on our man the whole time.”

Defensively for the Pirates, they will be playing without nose tackle Dimitri McGill, who is out with an injury. Fred Presley will move to the middle of the defensive line to fill the void. Presley said he is ready to do whatever he can to help the defense this week and moving forward.

“I haven’t played in the middle in a while, but it’s an easy transition,” said Presley, who came to ECU as a nose tackle before shedding some weight. “I have Dimitri helping me and my coaches helping me. They’re a very big part of what is going to happen for me this week. I’ve just been focusing on what they’ve been trying to tell me and that’s really all you can do.”

For some, the start of conference play will mean a new season and a fresh start. However, some of the coaching staff does not want the team to look at it that way.

Defensive coordinator Kenwick Thompson said that while it is important to reset the mind, holding onto tough loses, like those against South Carolina and Virginia Tech, is critical to learning.

“We are (0-0 now) and conference play is the most important thing to us, but we won’t forget what happened,” Thompson said Wednesday. “We feel like we can learn from (the losses). I think we’ll be better for it moving forward. You hate to learn hard lessons like that but it’s part of the game.”

The Pirates and Knights are slated to kick off at noon in Dowdy-Ficklen Stadium.