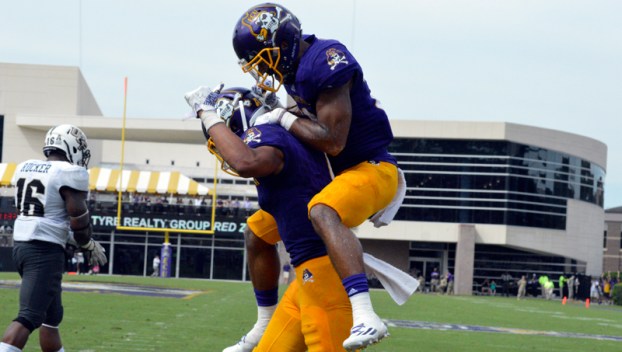 Deondre Farrier is mobbed by fellow receiver Quay Johnson after hauling in his first career touchdown as a Pirate.

The senior quarterback had to exit the game following the hit, but not before lying on the turf motionless for some time before trainers helped him to his feet and escorted him to the locker room. That moment summarized a game in which Nelson was let down by his offensive line and was scrambling for dear life on seemingly every play. He endured hit after hit before taking one final knockout blow with the Pirates down nine.

“Getting Phil hurt because of us up front is a bad feeling,” senior offensive lineman J.T. Boyd said. “That’s a reflection of us up front.”

Gardner Minshew, whose red shirt was burned as a result of Nelson’s injury, entered the game and provided an immediate spark, hooking up with Quay Johnson for a 75-yard touchdown pass on his first throw as a Pirate. It was an anomaly, however, as Minshew followed the touchdown throw with a pick-six on the following drive, putting the final nail in ECU’s coffin.

“He came in and gave us a shot there in the beginning,” head coach Scottie Montgomery said. “It’s hard to come in at the quarterback position when you’re not playing great on offense. We really struggled with him and Phil.”

Nelson finished 23-of-41 with 278 yards, two touchdowns and an interception. Minshew finished 12-of-27 with a touchdown and two interceptions.

UCF’s offense did just enough to win the game, tallying 370 yards to ECU’s 518. Senior quarterback Justin Holman finished 11-of-29 for 156 yards and two interceptions, while running back Dontravious Wilson notched two scores of his own. Most of the Knights’ production came in the second half when they finally capitalized on a plethora of Pirate miscues — specifically on special teams.

The Pirates found the end zone early in the second quarter thanks to a Nelson pass to Deondre Farrier. But ECU blew its coverage on the ensuing kickoff and the Knights’ Adrian Killins went untouched for a 100-yard touchdown. It marked the first of several special teams miscues that came back to haunt the Pirates.

“Our whole right side just disappeared and caved in,” Montgomery said. “There was nothing from the returner that we didn’t see. He just hit the gap and he has so much speed.”

Similarly to the special teams, the Pirate offense struggled, specifically in the red zone. ECU converted on just three of seven attempts inside its opponents’ 20-yard line, including a Farrier fumble as he was fighting for the end zone in the second quarter with the game tied at seven apiece. Instead of taking a 14-7 lead, the Knights pounced on the ball in the end zone.

While the Pirates had little trouble moving the ball, the red zone woes that popped up against South Carolina in Week 3 continued.

“All 11 men aren’t doing their job (in the red zone),” said receiver Jimmy Williams, who caught six passes for 141 yards. “If one person’s not doing his job then it screws up everybody. That’s what’s killing us down in the red zone.”

Despite UCF’s 47 points, ECU’s defense kept the team in the game, shutting out the Knights in the first quarter. But the four Pirate turnovers put extra pressure on the defense, which eventually took its toll.

“Sometimes the defense isn’t playing as well and the offense isn’t playing great,” senior linebacker Dayon Pratt said. “We just had to help them out like they’re going to have to help us out some games. We left a lot of points out there on the field but we can’t dwell in the past.”

The loss marks the third straight for the Pirates and gives them a 0-1 start to American Athletic Conference play.

GREENVILLE — It’s been a week of regrouping and learning from last week’s mistakes for the East Carolina football team,... read more