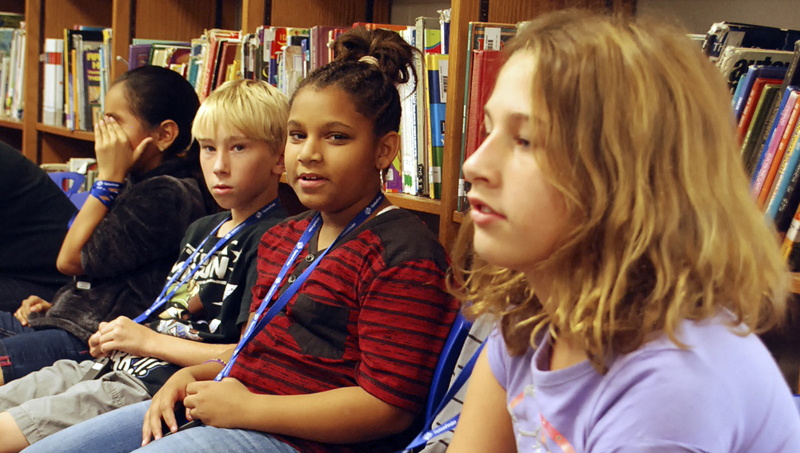 ANTI-BULLYING: One group of fifth-graders met in the library on Friday to discuss how to prevent bullying and the role of a bystander.

CHOCOWINITY — Middle school students were treated to a visit from representatives of the Raleigh-based Alice Aycock Poe Center on Friday.

Poe Center staff members Thomas Ray and Chelsea Kolander met with fifth-, sixth- and eighth-graders at Chocowinity Middle School to discuss bullying and what can be done to prevent it. The Poe Center strives to empower children by educating them about health, peer interactions and family life.

Ratliff said the school invited the Poe representatives down because the staff thought it would be a beneficial program — and at no cost to the school. She said she hoped to have the visitors meet with all grades, but scheduling didn’t work out for the seventh grade.

Ratliff said the activities were tailored to the different age groups, as part of the Poe Center’s anti-bullying program, “Don’t Stand By: Be a H.E.R.O. (Helping Everyone Respect Others).” The eighth-graders discussed topics such as stress, peer pressure, conflicts and how decisions made today can affect them later in life.

The fifth- and sixth-graders learned about the role of a bystander and what a person can do to help in a bullying situation. They also discussed instances when they experienced some type of bullying and examples of verbal versus non-verbal interactions.

“These are important skills for our students to be learning,” Ratliff said.

She said the students have already heard many of the lessons taught Friday, through regular activities at the school, but it can make a difference when hearing it from a third party.

Ratliff said she thinks it was a positive experience for the students across all grades.

“I think the kids enjoy it,” Ratliff said. “They were asking questions and getting involved.”

She said she hopes to invite the Poe Center back to Chocowinity Middle again.

For more information about the Poe Center, visit poehealth.org.