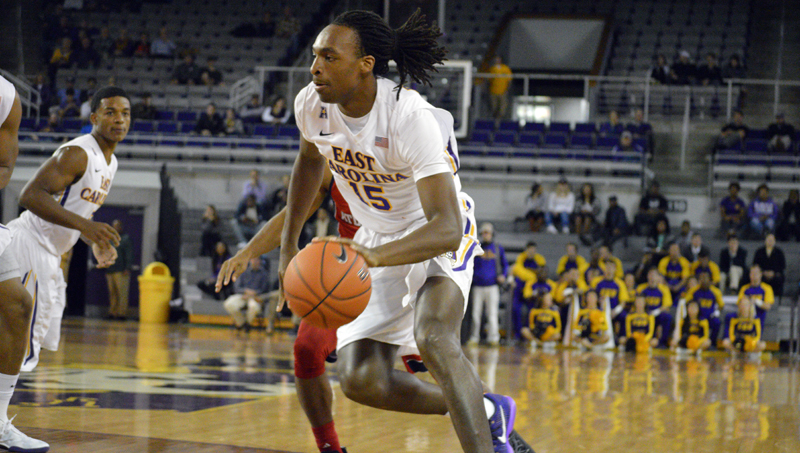 Kentrell Barkley drives to the basket in a game last season. Barkley was a standout on an ECU squad that oftentimes struggled. With his talent and versatility, the Pirates are hoping he can follow up his tremendous freshman campaign.

GREENVILLE — Kentrell Barkley certainly made his impact in his freshman season for East Carolina basketball. He was the fourth leading scorer and leading rebounder, but in his second year, expanding his game will be critical.

ECU head coach Jeff Lebo may be pressing that issue as Barkley, who played mostly as a swingman last year in 31 games and 11 starts, will spend time playing everywhere from point guard to power forward.

The Pirates lost three point guards during the off-season in Prince Williams, Lance Tejada and Charles Forster, leaving a big void. Currently, freshman Jeremy Sheppard is likely the only true point on the roster. Lebo will look to the likes of Barkley and B.J. Tyson to help lift the load, though he said Sheppard is likely to see the floor often.

“I do see (Barkley and Tyson playing at point guard) as a possibility,” Lebo said in his first press conference of the new year. “As the coach, you want to put your three best players out on the floor. You look at the three best players from last year and you’re probably looking at B.J., Caleb (White) and Kentrell. In order to get them on the court and to play big, you’ve got to get one of them (at point guard).”

Barkley hasn’t gotten a big head from his success last year, however, as conversations with White and Tyson have helped keep the 6-foot-5 utility player grounded. Lebo said

“The test for (Barkley) is a test that B.J. had to have and go through,” Lebo said. “Sometimes when you have success as a freshman, it happens that sometimes you think you have it figured out and there’s a sense of entitlement there. … We’ve talked a lot about that to KB and I think he understands the pitfalls that may lay in front of him.”

Tyson added he advised Barkley to not make the same mistakes he did going into his sophomore season and stressed the importance of coming into the gym every day, shooting and getting your body ready for the season ahead.

Barkley has a nose for the ball coming off the rim, as is evidenced by his 6.3 rebounds per game despite being outsized by most everyone playing in the paint in the American Athletic Conference.

Moving down to play power forward more won’t be an issue for Barkley, who said it is mostly about adjusting to small things at the position.

“(I’m expecting to) play a little bit more of the four position, so learning that has been a big focus,” Barkley said during the Pirates’ media availability last week. “A lot of it is about learning how to hedge and drop there.”

Stopping ball handlers off screens will be critical this year, especially in conference play, as drives from opponents’ guards was a big part of the Pirates’ defensive breakdowns last year.

Inside play has been a question mark year after year for the Pirates, but this season there is a bit more talent and a lot more leadership down low than in years past. Senior forward Michel Nzege is one of those leaders down low and he said coaching up Barkley is something he tries to avoid because of his natural ability.

“I don’t think there’s anything I really need to tell Kentrell,” Nzege said. “He plays so hard and he can bang down there. He’s a big kid. Playing at the four really won’t be much of a challenge for him, plus it’s kind of like playing the perimeter just in two or three set ups he’ll have to be inside.”

Barkley and the rest of his Pirate teammates have a little over a month to prepare for the season before a rematch of last year’s season opener against Grambling State Nov. 11 inside Minges Coliseum.