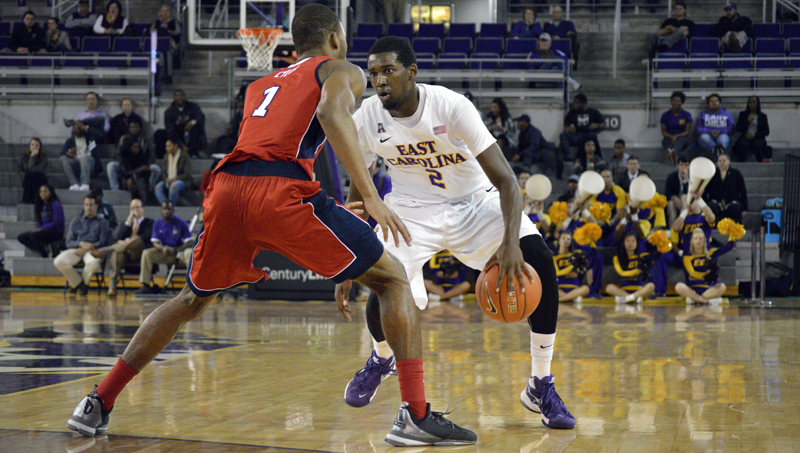 Caleb White goes one-on-one with a Florida Atlantic guard in an early-season game last year. White feels more comfortable with the size additions to the team ahead of this season.

Greenville — Nobody is happier about the influx of tall forwards that have joined the East Carolina basketball program than senior Caleb White.

At 6-foot-7 and listed as a guard, White was forced by a lack of size inside to take on a bigger role as a forward since joining the program in 2013. Though he has the versatility to help out in the paint, White admitted that it’s not necessarily his comfort zone.

“Last year, I was a lot more in the front court, battling bigger guys, stronger guys, guys that weigh more,” White said. “I think this year I’ll be back to my natural position, playing two-guard, being able to use my length and my size against smaller guards so that’s where I think it’ll be different this year.”

As a freshman, White and the Pirates were in their final season in the Conference USA, where the team was finding increased success. White made his debut against the Duke Blue Devils in Cameron Indoor Stadium and averaged 12.4 points and 3.3 rebounds per game, while playing mostly as a slashing shooting guard.

However, it was as a sophomore and last season as a junior where White had to make a move inside to help accommodate for increased size in the American Athletic Conference. Still, his production didn’t suffer and he averaged 12.2 and 12.5 points per game, respectively, in those seasons.

Now though, White and the Pirates have welcomed 7-foot-1 graduate transfer center Andre Washington and 6-foot-10 forward Jabari Craig. They also have a recovered Deng Riak ready to return. Those three will support a forward position that welcomes back 6-foot-8 Clarence Williams and Michel Nzege.

To White, it’s a big difference from what he remembers, and a welcomed change.

“Everything is so different. Every year I’ve been here, you look on the court and at the (small forward) spot, you have guys like 6-foot-4 to compete night in and night out,” White said. “But now, you look there and it’s 6-foot-9, and then behind that you have another 6-foot-9 and that’s just at the four position. It’s guys that are older guys and can play so that’s where it’s different. There’s a lot more depth and a lot more talent.” 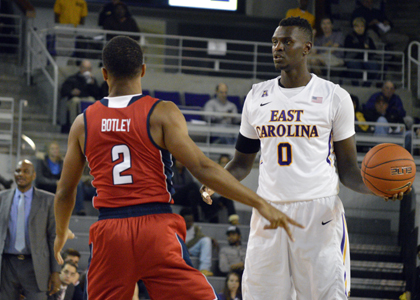 Deng Riak sizes up a Florida Atlantic defender last season. Riak only played in a few games before suffering a season-ending shoulder injury. His return this year bolsters ECU’s depth at the forward positions.

White stands as one of the Pirates’ best 3-point shooters. He made 70 shots from behind the arc and expects to have similar production this season, while still helping out inside where needed. With a potential backcourt of White at shooting guard and B.J. Tyson or Kentrell Barkley at the point, ECU hopes that the guard position can take relief away from the forwards, and provide opponents with different looks.

“I feel like it’s going to be pretty exciting because of the fact that I’m a driver at the point and it kind of sets him up as the shooter,” Tyson said of White. “It opens up more space for me to drive and for him to drive and that’s going to help us tremendously.”

Even with the added size, White will likely see time as a hybrid forward that defends the perimeter lane and shoots behind it. If his number gets called to battle in the paint, he says he’ll be ready.

“I’ve always been blessed to play under some great coaches, so I was really prepared, whether it’s working (as a forward) or as a guard or playing at multiple positions and being a leader,” White said. “I think it’s just my versatility and I think I’ll be able to showcase it a little more this year.”