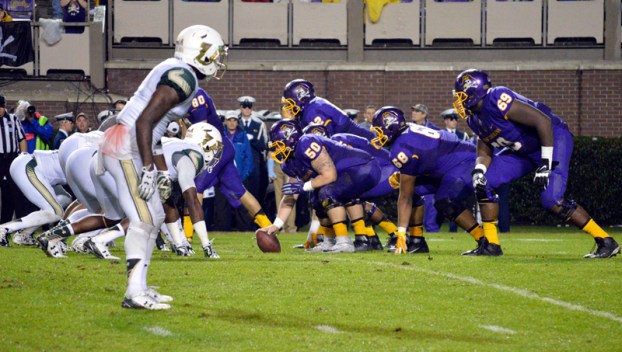 East Carolina and South Florida square off in Dowdy-Ficklen Stadium for a game in rainy conditions last season. The Bulls and Pirates meet again on Saturday in Tampa, Florida.

TAMPA, Fla. — Standing in East Carolina’s way of its first conference victory on Saturday is perhaps the best player in the American Athletic Conference and one of the best running backs in the nation.

Through four games, Marlon Mack, a 6-foot, 210-pound junior has 333 rushing yards, six touchdowns and is averaging 6.7 yards per carry. In short, Mack is a lethal combination of size and speed.

“He’s been one of the better backs in this league for a long time so the offense goes through him,” ECU defensive coordinator Kenwick Thompson said. “That’s what our challenge is; to limit the running game, be smart with play-action pass and tackle.”

“They had a lot of speed,” senior Terrell Richardson said of the meeting last season. “You know he has good balance, so you have to keep your feet. And even if you do keep your feet, he has a good stiff arm that can throw you off balance.”

Mack isn’t the only weapon South Florida boasts, though. In fact, quarterback Quinton Flowers is out-rushing Mack and averages 76.6 rushing yards per game so far this season. Flowers also has 12 touchdowns, eight of which are through the air, and 1,455 total yards of offense.

USF as a team is averaging 45.8 points per game — more than No. 6 Houston and good for first in the American. It’s no secret that Flowers and Mack lead the conference-leading offense.

For ECU, finding a way to keep the dangerous duo in check is their biggest goal.

“We just need to do our job,” junior linebacker Jordan Williams said. “We just have to make tackles in the open field, get the running back down and the quarterback down.” 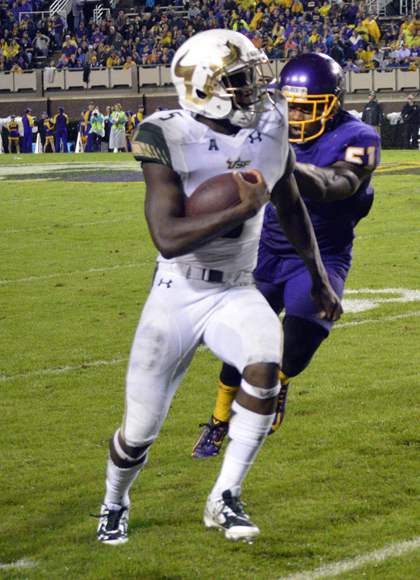 USF running back Marlon Mack runs along the sideline in last season’s meeting. Mack, one of the conference’s elite running backs, may prove to be a big problem for ECU’s defense.

Making things even tougher for the Pirates, ECU will be without nose guard Demetri McGill for a third-straight game. Though the biggest question mark is the status of senior quarterback Philip Nelson. He practiced sparingly throughout the week, though head coach Scottie Montgomery is optimistic that he will be ready to go against the Bulls.

“We feel pretty good,” Montgomery said Wednesday. “We feel a lot better about his chances. He’ll come out and practice (on Thursday) and we’ll know even more.”

The Bulls have allowed 26.4 points per game, but the stat is skewed by their 55-35 loss to Florida State in Week 4. It was their only loss of the season. The Bulls claim wins over Towson, Northern Illinois, Syracuse and Cincinnati. In the three wins, USF no more than 20 points in a single game.

“Defensively, they’re going to cause us some problems as well,” Montgomery said. “They have speed. Deatrick Nichols is a cornerback I’ve known for a long time. I recruited him in the Miami area, and No. 10 (Deadrin Senat) on their front is probably one of their best players. At the linebacker position, Auggie (Sanchez) has been up for a lot of awards. He knows how to get the defense set.”

Sanchez, the junior linebacker, is second in the AAC with 48 tackles, and is tied for first with three sacks this season. In addition to him, Nigel Harris has 35 tackles, which is good for 10th in the conference.

A win over the Bulls would be the Pirates’ first in conference play this season. ECU is currently riding a three-game losing streak and looking for its first win on the road.

“I think there’s pressure and that’s what it should be,” Montgomery said. “That’s what we signed up for and what we’re here for.”

Greenville — Nobody is happier about the influx of tall forwards that have joined the East Carolina basketball program than... read more