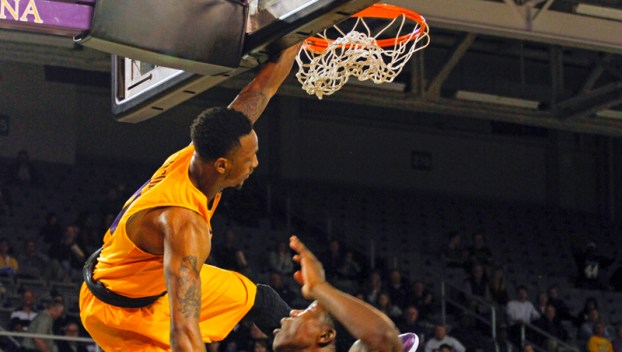 B.J. Tyson slams down a highlight reel dunk in a game against UNC-Wilmington last season. With graduations and departures from last year’s team, Tyson will be asked to fill the void at point guard. (Ronnie Moore/WDN)

GREENVILLE — The East Carolina men’s basketball has a clear need to fill on the floor with the departure of three point guards off last year’s team, and junior B.J. Tyson may be just the man to take over.

Tyson is traditionally a two-guard in the Pirates’ set and has thrived there over his past two seasons, finishing as the team’s leading scorer in both seasons. During Tyson’s past two seasons, a senior has been there to fill the point guard role with Antonio Robinson in 2013-14 and Prince Williams in 2014-15. With only one true point on the roster — a freshman at that — Tyson will likely take the majority of minutes as the facilitator.

Tyson said it’s not completely new to him as he had the experience in the past, including occasionally last season.

“That experience actually helped me out,” Tyson said. “Going back to high school, I actually played the point guard throughout my whole high school career. When I got here, it was even a little transition for me going off the ball and it was a little weird.”

Two years ago, the heir apparent to the point guard position was Lance Tejada, who would be a junior alongside Tyson this season. However, after a miserable sophomore season in which Tejada averaged 14.9 minutes per game and just 4.4 points, he opted to transfer to Lehigh of the Patriot League.

Another option was Charles Foster, who showed flashes of strong play last season. He, too, decided to leave the program after last season.

ECU head coach Jeff Lebo stressed the need for strong play from the point guards during his first media availability of the season.

“We’re going to have to slide someone down there,” Lebo said. “Obviously we lost Prince Williams, who was the Most Improved Player in the league last year and had a great season for us, so those are big shoes to fill. It’s probably, in college basketball, the most important position, so it’s a little uneasy when you’re not experienced there. We’ll slide an experienced guy that’s out of position, not used to playing it, down there.”

Lebo was a point guard himself during his playing career as a high school standout in Pennsylvania and as a starter under Dean Smith at North Carolina. Tyson said Lebo has been guiding him in terms of what to expect from playing the point more.

“(Lebo) told me to kind of work on my ball handling and work with my eyes up and just to be patient,” Tyson said. “I have a tendency of going a little fast, so he tries to tell me to go to the fourth gear instead of the fifth gear.”

Tyson made bounds of improvement in his facilitation during his sophomore season. After averaging just 1.4 assists in 24 minutes per game during his freshman season, Tyson put up 2.6 assists per game in 33 minutes per in his second season.

Tyson will likely share time with freshman Jeremy Sheppard and possibly sophomore Kentrell Barkley at the point this season. His potential move will open up senior Caleb White to move back to his most comfortable position of shooting guard and allow the offense to run a little more smoothly. 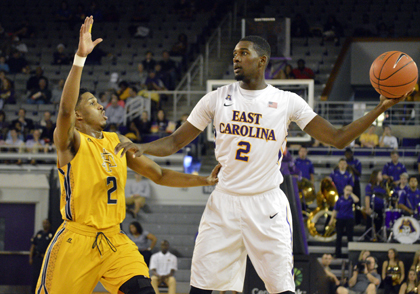 Caleb White staves off a defender in a game last season. Having the likes of Tyson, Kentrell Barkley and some newcomers working the point will allow him to return to his natural shooting guard spot.

For now, though, Tyson said the transition isn’t as daunting as it may seem.

“At the point, I’ve got to facilitate. I’ve got to know where everyone is at, from the one (point guard) to the five (center) and their positions,” he said. “You know, it’s not as difficult as people think it is just because the one, two and three is kind of similar. At the same time as the one, you just have that pressure on you of needing to know where everyone is in the split of a second.”

GREENVILLE — Problems are continuing to accumulate for the East Carolina football team, but the Pirates made noticeable strides over... read more