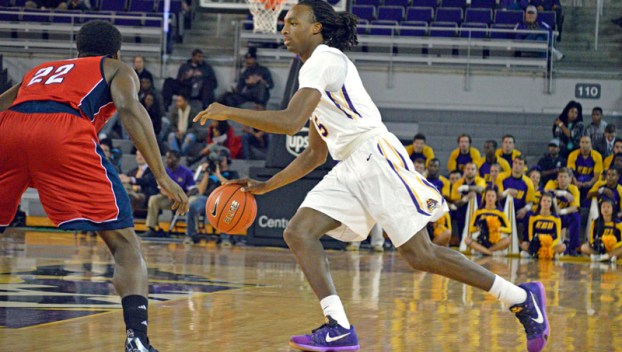 Kentrell Barkley looks to blow past a defender in a game last season. Barkley was last year’s exceptional newcomer. The Pirates are hoping Jeremy Sheppard can be this season’s breakout freshman.

GREENVILLE — Despite a cast of returning starters to East Carolina’s men’s basketball team, head coach Jeff Lebo and his Pirates will welcome in some fresh faces for year three in the American Athletic Conference.

Of the 10 new players, four are freshmen, and three and could see immediate playing time, according to Lebo. With just two true backcourt players in guards Caleb White and B.J. Tyson, ECU will likely lean on some of the newcomers, especially early on in the season.

“I like all our freshmen,” Lebo said. “I think they all have a chance to be good. Jeremy Sheppard is a point guard who’s skilled, played on winning teams and is going to get better. He can shoot, pass and think the game. I really like Raquan Wilkins who’s 6-foot-5 with a 6-foot-8 wingspan.

“Elijah Hughes is as talented as a freshman as we’ve had here. The sky’s the limit for him when he figures out how good he can be. We feel, recruiting wise, that we’ve had a really good year and addressed our needs in the backcourt.”

Sheppard is perhaps the most leaned upon freshman in early parts of camp. Lebo expects him to see immediate playing time at point guard, which is a position of need for the Pirates. Tyson and Kentrell Barkley expect to see time at the point, but both have excelled on the wing in past years. 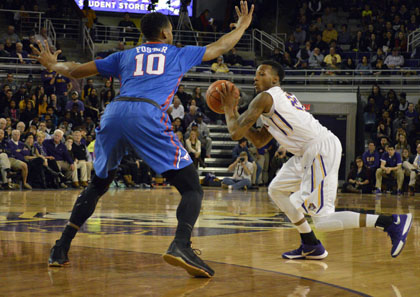 B.J. Tyson uses a ball fake to fool SMU’s Jarrey Foster. Tyson will play some point guard this year, but coach Jeff Lebo and the Pirates will also rely on some freshman talent, too.

Sheppard, however, stands as a true point player.

“Jeremy can step in, he can play,” said White. “It’ll be a job, getting used to the physicality and the speed of the game, but if he can get that down, we’ll be straight.”

Lebo has just four seniors on this year’s roster, including graduate transfer Andre Washington. Washington, a 7-foot-1 center, spent time at Wake Forest before joining the Pirates this offseason. Though he’s a newcomer himself, he’s embraced his role as a mentor to the younger players.

“I just want to show the young guys that you just need to have fun,” Washington said. “I’ve been here, I’ve had my highs and lows in college. At the end of the day, you just have to show them how to go through the process.”

The cast of new players has made early-season workouts all the more vital for Lebo and his coaching staff. Not just getting the youngsters up to game speed, but finding a team identity has been a point of emphasis for Lebo.

Once tipoff starts and the season takes off, he hopes an impact can be made.

“There are some intangible things we’re addressing with our team,” Lebo said. “When the games start, you really find out a lot about your group. This first month is going to be vital for our young kids to learn. But once the games start, we’re going to play a lot of guys that don’t have a lot of experience at this level, so we’ll see how they respond to that.”

GREENVILLE — The East Carolina men’s basketball has a clear need to fill on the floor with the departure of... read more