Pirates feeling good after week off 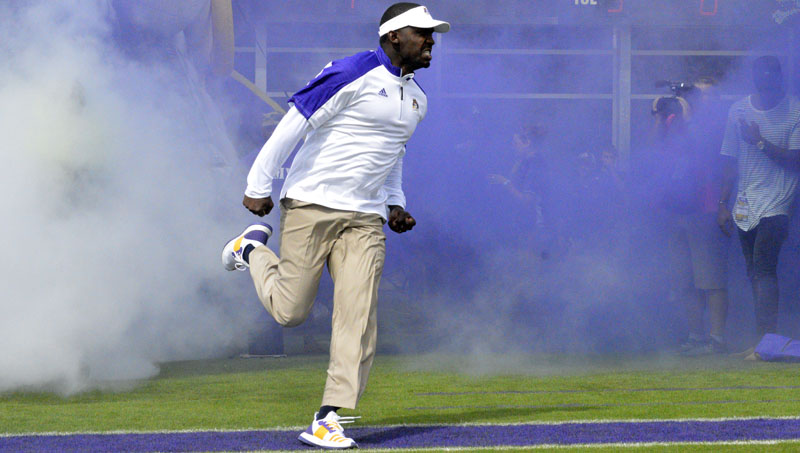 ECU coach Scottie Montgomery storms out of the tunnel before a game this season. Montgomery and the Pirates are feeling rested and ready for Saturday’s game at Cincinnati after an impromptu week off.

American Athletic Conference opponent Navy was scheduled to come to Greenville last Thursday for a nationally televised contest with the Pirates, but the game has since been moved to Nov. 19. The delay gave the Pirates a week off from both games and classes, and Montgomery said that he and his team were able to find a shred of positivity in the aftermath.

“The positive of a tragedy like we went through was that we had a chance to be around our team a whole lot over the last five or six days,” Montgomery said at Monday’s press conference. “We were able to grow our team much closer, and hopefully worked out some of the kinks.”

With the extra week off, ECU had a chance to prepare for its upcoming game on the road against Cincinnati. At 2-4, and with injuries to key players including nose tackle Dimitri McGill and quarterback Philip Nelson, Montgomery said his team needed the bye week to rest and heal.

“With our open date, I thought it fell right where it needed to fall, halfway through the year,” he said. “We were at a point in time, a lot of our guys were bumped and bruised. It was a physical gauntlet of games and so it came at a good time.”

Because of the team’s struggles on all three sides of the ball to start the season, Montgomery had the team practice twice a week. But Montgomery also found ways to turn the team’s focus from football. He took the team to the movies and held a freshmen party at his house.

All of this, he said, was planned well in advance.

“My schedule for the open date is something that we planned years and years ago,” he said. “Everything that we do is planned out from the way we practice to the live scrimmages for the young guys to a team meeting with just me and the players. We had a freshmen party at my house.”

The welcomed bye week did come with some obstacles, however. Montgomery said the team’s recruiting schedule was thrown off and there were concerns about travel for coaches.

“The only thing that shakes you a little bit is recruiting,” he said. “Thank goodness we were able to get coaches on the road and in planes and in the places they needed to be and get back. From an open date standpoint, we did as much as we could do and it just worked out really well.”

With the bye week now over, the Pirates are back into their regular practice schedule. But Montgomery reiterated the necessity of the bye-week.

“We had the support of our administration to do these different things,” he said. “Especially because it was an open date where we didn’t have school. So when you have all that time to be together, it worked out for our team mentally and physically.”

Greenville is slowly returning to normal after Hurricane Matthew. The Pirates will hope to get back on track with a more regular schedule, both with classes and practice, before heading out to Cincinnati on Saturday.