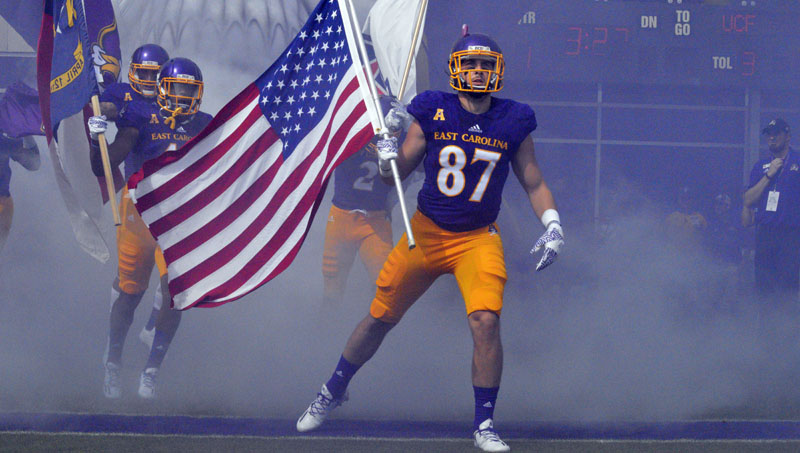 Sophomore tight end Beau Hoffman leads the Pirates out of the tunnel against Central Florida. ECU returns to action after last week’s meeting with Navy was postponed.

CINCINNATI, Ohio — It’s been two years of heartbreak for the East Carolina football team (2-4, 0-2 AAC) while facing Cincinnati on the gridiron. The Pirates will look to change their misfortune this weekend as they hit the road for an American Athletic Conference showdown.

Two years ago, Shane Carden and company put up 46 points on Cincinnati late in the season, but with 15 seconds left, kicker Andrew Gantz split the uprights to put the Bearcats up by two, and a last-second defensive touchdown iced the win for Cincy. Last year while ECU celebrated senior day, the Bearcats again had other ideas in mind as Gantz again played hero with a 42-yard game-winning field goal.

Senior offensive lineman J.T. Boyd remembers both of those games. For the fifth-year center, a win would mean a little bit more this time around.

“Since I’ve been here, we haven’t beaten them, so it’d be nice to go out with a win senior year,” Boyd said. “For one, to get back in the win column, two, just haven’t beaten them yet, and three, getting this done for Pirate Nation.”

Boyd and the rest of the offense will have their hands full with a defense that has allowed more than 20 points just twice this season — once against No. 11 Houston and against South Florida, who is receiving votes in the AP Poll. Furthermore, the Bearcats (3-3, 0-3 AAC) rank No. 9 nationally in turnovers forced, including three fumble recoveries and 12 interceptions.

Racking up yardage against Cincy’s defense hasn’t been an issue as it ranks No. 79 in yards allowed per game in the country at 418 yards, compared to ECU at No. 81 with 420 yards allowed per contest. The turnovers and a staggering red-zone defense that ranks No. 4 in the nation have alleviated most of the issues from allowing high yardage totals.

Star wide receiver Zay Jones said he and the receiving corps are well aware of the challenge that comes with facing such a dynamic secondary.

“I won’t let the stats mistake how good of a team they are,” Jones said. “They get some turnovers, they take away the ball from the offense and they do a good job of that. This is a solid football team. Even though they let up some plays, you know that you need to be prepared to play them.”

Defensive backs Mike Tyson and Alex Thomas lead the team with three interceptions each while both Tyrell Gilbert and Linden Stephens have a pair of picks on the season. Senior linebackers Eric Wilson and Antonio Kinard lead the Bearcats in tackles with 65 and 45, respectively.

Both are physical and quick players on the second level and have combined for 4.5 sacks. Comparatively, Dayon Pratt has the only sack of the season for ECU and the defense has just five turnovers.

Boyd said the brute strength of the Bearcat defense is what separates it most from other teams.

“They’re very physical,” Boyd said. “I was playing guard last year and I remember their two inside guys there and they’re a handful. They’re good, they’re strong. We’re definitely going to have to play low and have good pad level in order to be successful up front.”

Offensively, senior Notre Dame transfer Gunner Kiel has won back a starting job he held for two years. Last season, however, Kiel was knocked out and suffered a brutal concussion against Memphis and struggled to recover. Hayden Moore and Ross Trail have tag-teamed the starting duties, and things have not gone well for the Bearcat offense.

The pair combined for 1,595 yards and 10 interceptions while throwing just 8 touchdowns. The decision to start Kiel comes after an ugly 20-9 loss against Connecticut in which Cincinnati rushed for just two yards. Moore threw for 315 yards, but threw a pick and did not throw a touchdown.

This game is a virtual must-win for both teams if they are seeking bowl eligibility. The Pirates and Bearcats will kick off at 7 p.m. inside of the newly renovated Nippert Stadium.