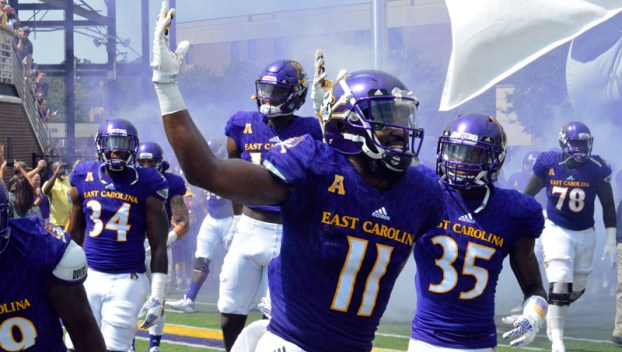 James Summers leads a host of Pirates onto the field before a game earlier in the season. ECU looks to snap a five-game losing streak on Saturday when it hosts UConn.

Riding a five-game losing the streak, the Pirates are desperate to turn things around. They sit on the brink of bowl ineligibility for the second straight season, and Saturday’s homecoming game could the best chance start righting the ship.

“A win this week would go a long way in solving a lot of things,” said ECU head coach Scottie Montgomery.

Since beating N.C. State in Week 2, the Pirates have spiraled out of control. Winless in the conference, East Carolina’s turnover and red-zone woes have plundered its season. Now, the first-year head coach is tasked with resurrecting a season.

“This is big-person football,” Montgomery said. “We are competing at the highest level. If you can’t be consistent doing that, you won’t be accountable anyway. … I have never put emphasis on a set number of wins. I want us to be the best football team we can and we have not done that in my opinion.”

Perhaps luckily, the Pirates get their chance to pick up a conference win and end the losing streak against another fledgling AAC school with a serious flaw.

ECU (2-5, 0-4 AAC), which leads the conference in completions, attempts and yards, will square off with the Connecticut Huskies (3-5, 1-4 AAC), who have allowed the most completions and passing touchdowns.

The matchup in the passing game obviously leans towards the Pirates, and it will likely be a point of emphasis in an offense that already attacks through the air.

Receivers Zay Jones and Jimmy Williams have statistically been two of the American’s best pass catchers this season. Jones has 95 receptions this season and Williams averages 22.2 yards per reception. Both are looked at as catalysts in the Pirate offense, and both could be trouble for the struggling UConn defense.

“When you have two receivers like (Jones and Williams), the offense is going to go through them,” offensive coordinator Tony Petersen said. “When the defense takes those guys away, that’s when some of the other receivers will get the ball.”

ECU quarterback Philip Nelson has battled injuries as a result of poor offensive line play this season. But when healthy, the senior signal caller has found ways to find Jones and Williams. His 13 passing touchdowns are tied for third in the conference.

A healthy Nelson could spell trouble for the Huskies.

Safety Obi Melifonwu is arguably UConn’s best defensive player. With two of his team’s four interceptions, and a fumble recovery, Melifonwu will likely have his hands full with Williams and Jones. His 64 tackles leads the team, but also serves as a testament to how much he is relied upon in the back end of the secondary.

“That’s a tough, physical defense,” Nelson said. “They’ll sit in the zone or move up into man but physicality is their main thing.”

Kickoff for the Pirate homecoming game is slated for 12 p.m. on Saturday in Dowdy-Ficklen Stadium.