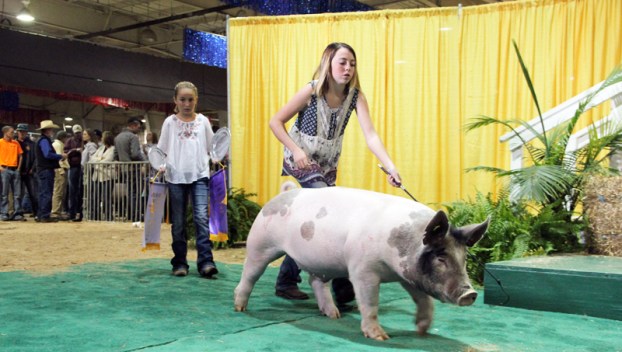 SHOW TIME: Emma Barrett, 12, shows her barrow off to the judges, with the help of 10-year-old sister Anna Claire, at the N.C. State Fair.

Beaufort County had proud representation at the North Carolina State Fair this year.

Pinetown resident Emma Barrett, 12, who attends Terra Ceia Christian School, took home the titles of reserve grand champion and grand champion “Got To Be NC” for the presentation of her barrow in the fair’s annual livestock competitions. A barrow is a male pig that cannot reproduce.

Barrett said she got Hank the barrow in July when he was little, and raised him up to weigh a hefty 260 pounds. With white skin and gray patches, Hank was nicknamed Rusty because of an unusual red patch on his head.

There was a strict regimen for raising Hank, which included special food all the way from Illinois, nightly walks to practice for judging and specific bathing requirements — including conditioner.

“That would make his skin look all nice, and it wouldn’t be all flaky,” Barrett said.

All of the hard work paid off, however, and by October, Hank was ready for his debut at the fair.

Barrett said this was the third year she and her family competed at the fair, and they present a different barrow each time.

“We do it together. It’s a family thing because my sister (Anna Claire, 10) enjoys it as well,” she said. “It’s really fun, but it requires a lot of work.”

For her win, Barrett received two banners and a plate. After the competition ended, Hank was auctioned off at the fair, and the family also received the money from the sale.

Because her time with the barrows is limited, Barrett said she doesn’t get too attached to them beyond preparing for the competition.

“You want to be so responsible, and you put the pig as one of your primary things,” she said.

This hard work certainly isn’t for everyone, and Barrett said it requires stamina and the motivation to stay the course.

“I hope I inspire other people to try and work hard and show pigs,” she said. “I’m very thankful for all the people who have helped me through this project.”

Beaufort County’s unemployment rate fell from 5.6 percent in August to 5.3 percent in September, according to information compiled by... read more