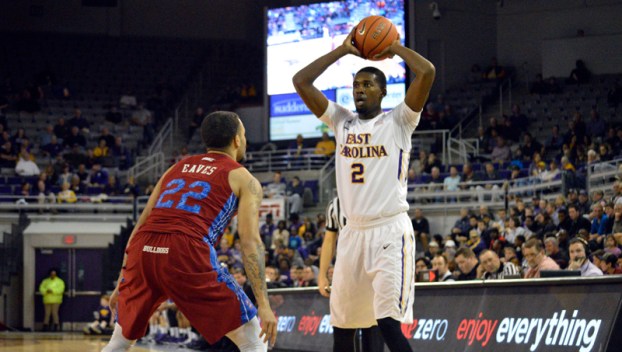 Caleb White looks for a pass during a game last season. White scored 20 points in the first game of his senior season — a win over Grambling State.

GREENVILLE — The East Carolina basketball team slowed down the offensive pace on its way to a 17th consecutive season-opening victory, topping Grambling State, 72-57, inside Minges Coliseum.

Things were closer than the final score indicated as ECU took advantage of 14 second-half fouls by the Tigers and pulled away at the finish line.

The Pirates got off to a slow start. They turned the ball over eight times in the first half, while only turning in six assists. The Pirates slowed things down late each of the two halves and found success with that. Acting point guard B.J. Tyson finished with 8 assists and facilitated the offense well, according to ECU head coach Jeff Lebo.

“I was really happy,” Lebo said after the win. “Defensively, he was really solid. He made good decisions with the ball. It’s a big move for him (to point guard). It’s like moving from running back to quarterback. But I was very pleased with B.J. tonight. ”

Caleb White continued to be a shining light as he kicked off his senior season with a quiet 20-point outing while going 6-for-8 from the field and 2-of-3 from behind the arc while hitting six free throws.

“I just let it come to me,” White said. “Picking a couple of spots in transition, trying to get to the free-throw line by stepping in and taking the open ones. It’s just like I’ve done in the past years, so it really just came to me.”

White’s seven free-throw attempts were a microcosm for ECU as it took 33 trips to the line as a team. Grambling State spread out 31 fouls, and each of the team’s starting five had four fouls. The Tigers attempted just nine free throws as ECU committed just 16 fouls.

That foul discrepancy could largely be attributed to the size advantage the Pirates had inside. Lebo rolled out a pair of new bigs in the form of 7-foot-1 center Andre Washington, the tallest player in ECU basketball history, and Jabari Craig.

Washington, a Wake Forest graduate transfer, played his most minutes in a college game in the win with 21. Lebo said he was happy with the big man’s performance, and knows what he will look for in the future.

“He hadn’t played much and hadn’t been asked to be a key figure,” Lebo said. “Here, he has some expectations put upon him and be depended on. He was nervous tonight but I really couldn’t tell it. I thought he was really good, and you can see the effect he can have on a game from his shot blocking and how he makes people miss.”

Barkley (14 points), Tyson (12 points) and White (20 points) all scored in double figures for the Pirates to anchor the pull away in the second half.

The Pirates were left with a short bench in the season opener as forward Michel Nzege is out for a short period of time with a knee injury and freshman guard Jeremy Sheppard will miss the first three games of the season due to a violation of team rules.

With the win, Lebo earned his 100th career victory as ECU’s head coach and now stands with a .500 record with the Pirates.

ECU will have the rest of the weekend off before playing North Carolina A&T Monday night in Minges.

Pirates, Mustangs meet with bowl eligibility on the line

GREENVILLE — When the Pirates take the field against Southern Methodist Saturday in Dowdy-Ficklen Stadium, a bowl game appearance will... read more