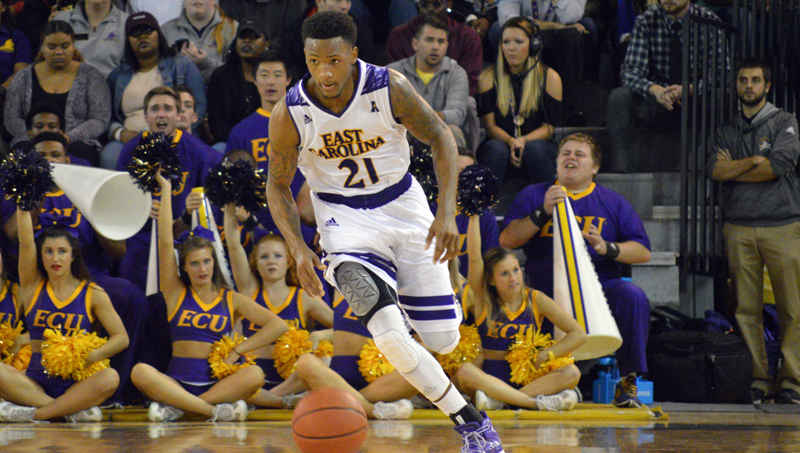 B.J. Tyson brings the ball down the court Monday against N.C. Central. Tyson, who has been playing a lot of point guard early in the season, had 13 points and four steals in the win over the Aggies.

GREENVILLE — Caleb White’s 3-pointer opened the scoring for East Carolina Monday night against NC A&T, and the Pirates never looked back as they rolled to a 61-51 win and 2-0 start.

Despite the Aggies striking first with a 3-pointer of their own, White’s shot from behind the arc tied the game and catapulted ECU to a lead it would not surrender. The offense gave the Pirates the lead, but the defense kept the Aggies at bay.

“When we came into this game, our coaches were anxious to see if our defensive intensity would be where it needed to be,” White said. “Opening the night with all the fans and it being a new season, I felt like we came out and defended really well.”

Head coach Jeff Lebo said after the game that stopping Aggies guard Sam Hunt was the main priority. Hunt finished with 17 points, but didn’t burn the Pirates from long range, finishing just 3-of-8. Freshman guard Raquan Wilkins had a lot to do with stopping Hunt.

“I think Wilkins is our best defenders,” Lebo said. “I had him on Hunt for a lot of the second half. He did a good job. Hunt is a terrific player. He can shoot it and pass it and he’s tough.”

Early fouls dictated the style of play for both teams, and the Pirates capitalized by making 19 free throws and working in the paint. The quick start and size advantage led to a 35-22 halftime lead for the Pirates, while the smaller Aggies struggled to find their touch from beyond the arc, finishing just 26 percent from the 3-point line.

In the end, every player saw double-digit minutes on the court. For Lebo, that stems from high-intensity practices that simulate game situations.

“It helps us so much in practice,” Lebo said. “We just get so much more out of practice when they’re competitive, and they get better. Hopefully we can stay healthy, but we still need another guy that can step up for us and shoot it from behind the arc.”

Craig, despite finishing 0-of-5 from the field, had four blocks and 13 rebounds while playing 25 minutes. His outburst is encouraging for a team that lacks a strong defensive presence in the post outside of graduate transfer Andre Washington.

“They didn’t throw the ball into the post at all,” Lebo said. “We blocked nine shots. That’s what happens when you have size and you have shot blocks. They altered a lot of shots and got hands on them.”

The Pirates out-rebounded the smaller Aggies, 47-33, and forced seven turnovers. On top of his 13 points, Tyson also had four steals. With a road matchup against another small team in UNC Charlotte looming, Lebo and his team hope that their performance Monday night will transfer over to Thursday’s tilt.

“We’re happy to be where we are, that was the goal,” Lebo said. “Now the next one will be set to win our first game on the road. If you want to be good, you have take care of business at home, but if you also have to win on the road.”