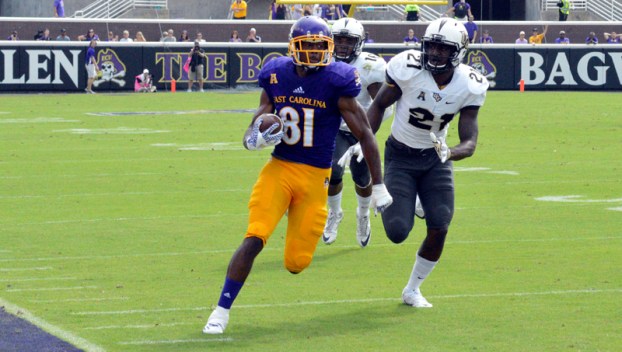 Jimmy Williams makes a catch and takes off in a game against Central Florida earlier in the season. Williams and 20 other seniors will play their final game in Dowdy-Ficklen Stadium on Saturday.

GREENVILLE — Bittersweet is a common theme on Saturdays like the one upcoming for the East Carolina football team.

That was the term used by both Demetri McGill and Terrell Richardson during practice this week when discussing Senior Day. The Pirates will take on Navy in a game that was postponed due to the effects of Hurricane Matthew, and it will be the last time at Dowdy-Ficklen Stadium for the 21 seniors on ECU’s roster.

The past two Senior Day games have ended in heartbreak for the Pirates. In 2014, it was Central Florida and Justin Holman’s 51-yard Hail Mary to end Shane Carden and Justin Hardy’s Dowdy-Ficklen careers. In 2015, the Cincinnati Bearcats dashed the Pirates’ hopes for a 6-6 season and a bowl bid with a last-second 42-yard field goal to win, 19-16.

This weekend, the Pirates face one of their toughest challenges of the season, specifically from a defensive standpoint. In the past four games against the Midshipmen, the Pirates have allowed an average of 53 points, including a 76-35 shellacking in Greenville in 2010. Navy’s offense is no weaker this year than in years past.

“They’ve got another good quarterback and they’re still very fast on the edges,” Richardson said. “They’re physical as always up front. We know they’ve won a lot of games and we’ve got to be ready for them.”

The Midshipmen are 7-2 on the season and have suffered just one loss in the American Athletic Conference, dropping a shootout to South Florida on Oct. 28. With a win against ECU Saturday, Navy will make a trip to the AAC title game that it narrowly missed out on last season.

Richardson said forcing Navy out of a conference championship isn’t a major motivation factor for him, but McGill said it is an interesting scenario to play spoiler.

“It’s a little bit of a drive,” he said after Wednesday’s practice. “Even though we’re not really in the race, it would be nice to knock them out.”

Navy’s triple-option attack starts with its quarterback. Will Worth is the Midshipmen’s leading rusher with 915 yards and 18 touchdowns on the season. Six backs have rushed for over 100 yards on the season, and Chris High is perhaps the most dangerous of the group.

High is the second leading rusher with 473 yards on just 71 attempts. He has added five touchdowns and, as always, will play a critical role this Saturday.

Defensive backs coach Rick Smith was the defensive coordinator for the last three meetings against Navy. On senior day, as emotions run high, defending an offense that takes a tremendous amount of focus may be difficult for some.

Smith said he and his staff do the best they can to keep players in check, but ultimately it will come down to leadership.

Ultimately, what rises to the top for Saturday’s game will be the potential for senior wide receiver Zay Jones to pass former teammate Justin Hardy as the all-time FBS leader in receptions. Jones is just eight catches away from taking sole possession of first place. He will likely break the mark Saturday.

The Pirates are set for a 4 p.m. kickoff against Navy Saturday inside Dowdy-Ficklen Stadium.

GREENVILLE — Zay Jones fought for relevance as a recruiting afterthought in football’s hotbed. The Texas native had no offers... read more