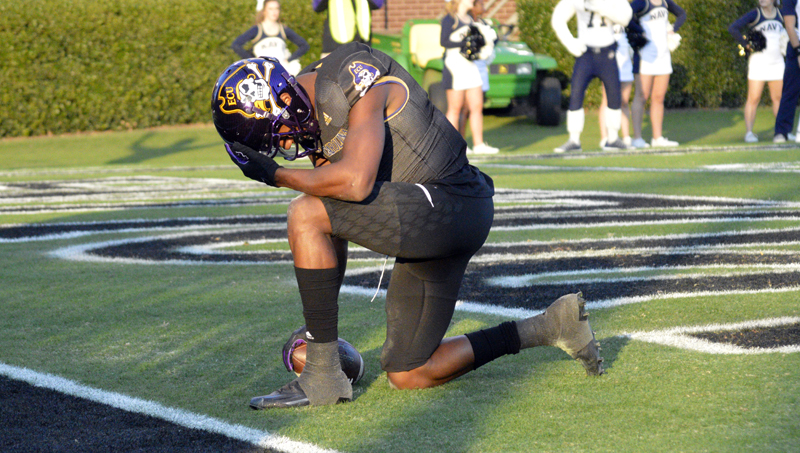 Zay Jones celebrates an early touchdown in last weekend’s final home game of the season. Jones, who broke the FBS career receptions in Dowdy-Ficklen Stadium a week ago, will play his final game in a Pirate uniform at Temple.

PHILADELPHIA, Pa. — As the East Carolina football team prepares for its final go-around of 2016, there is no lack of motivation for the Pirates, who travel to Temple for the season finale.

ECU head coach Scottie Montgomery said it’s easy for him to excite his players even in the midst of a 3-8 season.

“This is the last time we play together as a team this year,” Montgomery said. “Coaches are paid to motivate their players in tough situations and looking in the eyes of a Dayon Pratt and a Zay Jones, that’s enough for me to motivate all 110 guys.”

Despite an anticipated step-back this year as much of a daunting defense graduated after last season, the Owls have rattled off an 8-3 season. After an early season loss to Army, Temple has rebounded will and since only dropped a narrow contest against Penn State and fell to Memphis.

The Owls have a backfield duo to be feared between Ryquell Armstead and Jahad Thomas. Thomas, who takes most of the carries, is the second leading rusher with 704 yards and 10 touchdowns on the season. The secondary back, Armstead, is the leading rusher with 807 yards while playing in one more game than Thomas. Armstead is a home-run threat and has notched 11 rushing scores on the year.

Behind center, senior quarterback Phillip Walker has had a strong season. He has completed 57 percent of his throws for 2,542 yards and 18 touchdowns, though he has struggled to maintain possession as he has thrown 12 interceptions.

Walker spreads his targets across his offense, though Thomas is also dynamic in catching the ball out of the backfield. Thomas is the third leading receiver with 400 yards on 29 catches, and six have gone for touchdowns.

“As a team, they rushed for about 220 yards and threw for about 330 (against Tulane last week),” Montgomery said. “All of this is why they are in the situation they are. While they aren’t the biggest team we will see, they are working well on offense and defense.”

Defensively, the Owls are coming off back-to-back shutouts against Connecticut and Tulane and three weeks ago allowed just 13 points against Cincinnati. The defense has forced 19 turnovers on the season with 11 fumbles and eight interceptions. Defensive back Delvon Randall has three of the team’s picks on the season and Haason Reddick has forced three fumbles.

With a defense that is rolling, ECU may have a tough time pushing back.

For the Pirates, sophomore Gardner Minshew will likely take the start behind center over Phillip Nelson for the second straight week. Dayon Pratt, who has missed a pair of games due to injury, will have a chance to play this weekend, per Mongomery. Pratt has been missed on the defensive side of the ball, especially given last week’s 66-point outing by Navy.

“It’s hard to move past a game when you give up 66 points, but that’s what we have to do,” Montgomery said. “Defensively, we did not tackle well. We were where we were supposed to be schematically, but could not get people on the ground. Our lack of ability to tackle and move to the football showed up all over the field.”

ECU will need improvement from the defensive side of the ball to have a shot against the strong Temple offense. It will likely be a tough day for the ECU offense however with the high-powered defense.

ECU and Temple will kick off from Philadelphia at 7:30 p.m. to end both of the teams’ 2016 seasons. The road will end for ECU. For the Owls, a date with Navy in the American Athletic Conference Championship and a bowl game are still left to look forward to.