Pirates fall to No. 14 Cavaliers 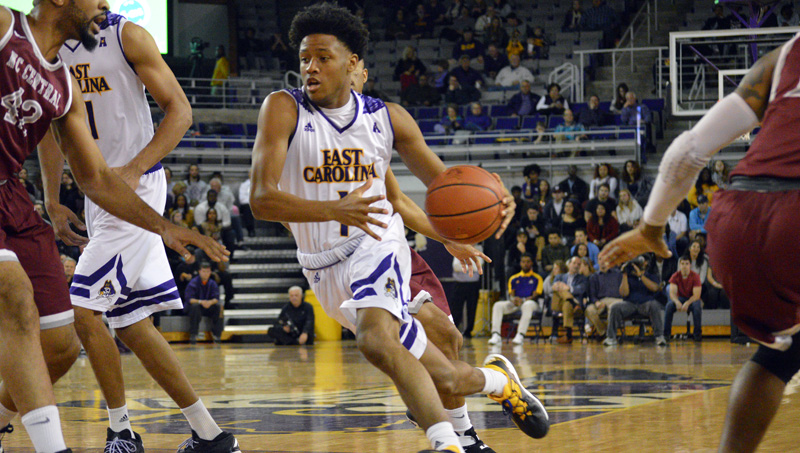 Freshman stud Jeremy Sheppard drives the lane against N.C. Central over the weekend. Despite Sheppard pouring in 17 points off the bench, ECU lost to 14th-ranked Virginia.

CHARLOTTESVILLE, Va. — The East Carolina men’s basketball team took its 76-53 loss to No. 14 Virginia as a learning experience as the Cavaliers coasted by the Pirates on Tuesday night.

ECU stuck around early in the first half, but a 27-4 run in the last 9:26 of the first half lifted Virginia to its commanding victory.

The Pirates held their own as 3-pointers fell early. They started the game 4-of-4 from behind the arc. It was Caleb White who opened the scoring for ECU with a dead-on triple through a double screen. B.J. Tyson followed with a pair of treys made on consecutive possessions, the latter of which tied the game at 9-9. White gave ECU the lead with his 3-pointer made with 14:14 left in the first half, but it was short lived.

UVA blew open the game with its massive run as it started to get 3-pointers of its own to fall. After starting just 1-of-9 from behind the arc, the Cavaliers sank seven consecutive 3s to spark the run, including three from Kyle Guy.

“I love Guy,” Lebo said. “He knows how to play. He’s a little bit better athlete than you think. In person, I was impressed with his ability to move and he’s smart. Every open shot, you think is going down once he gets it, whether it does or not.”

Virginia capitalized using ball movement once ECU came out of its zone. It assisted on all 15 of its field goals made in the first half.

Lebo and players alike pointed to UVA’s experience as a key factor in what made it so difficult to defend as ECU’s zone broke down.

“They’re good. They pass it, they share it, they know where (the ball is) supposed to go,” Lebo said. “A lot of these guys are redshirt guys and have been in the program. They’ve got a good team. That’s why they’re ranked.”

Virginia uses three redshirted players in its starting lineup ,but still looked to the bench to provide most of its scoring. Even with ECU true freshman Jeremy Sheppard scoring a game-high 17 points off the bench, as he shot 4-of-6 from 3-point-range, Virginia’s bench outscored ECU’s 47-28.

ECU failed to get anything going inside the paint, specifically from Andre Washington. The Wake Forest graduate transfer took just two shots and missed both in his 17 minutes of action. To counter the staunch inside defense of UVA, ECU ran a small lineup most of the game, which left the Pirates vulnerable on the inside.

“With their double teams, we got nothing inside,” Lebo said. “They force your big guys to pass. Andre struggled, five turnovers against those double teams. You’re going to have to make contested shots to beat them because you’re not going to get anything that’s open or uncontested.”

The Pirates shot just 36 percent from the field on 18-of-49 shooting. ECU’s top-10 field goal percentage defense was exposed against a team that reached the Elite Eight last year. The Cavaliers shot 30-of-53 from the field and hit 9-of-21 shots from behind the arc.

Virginia senior point guard London Parrantes scored 12 points and tallied five assists without committing a turnover in 29 minutes of play. ECU’s big three of Tyson, White and Kentrell Barkley shot just 8-of-28, and Barkley was the only one of the three to reach the free throw line as UVA neutralized any chance for the trio to drive to the lane.

Tyson said the most important thing he and his teammates can take from the loss will be the toughness of a team that is again anticipated to make a deep run come March.

“We’ve got a lot of learning to do and if we want to go to the (NCAA) tournament, this is (the type of team) we’re going to have to face off with and play against,” Tyson said. “This isn’t doing anything but helping us learn and build from it. They were smaller than us, but they played with toughness and I think we’re going to have to learn from this because the level is about to go up higher.”

As final exams begin on ECU’s campus, the Pirates will be off until next Thursday when they face off with College of Charleston at home.