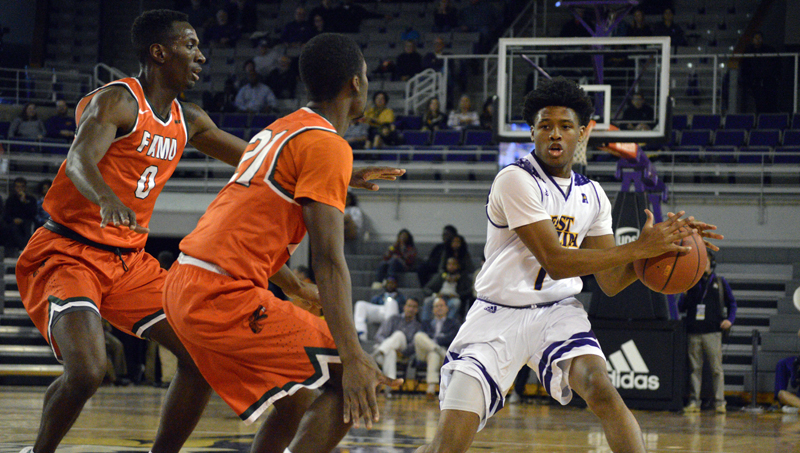 Freshman point guard Jeremy Sheppard gets double teamed in a game against Florida A&M earlier in the season. Sheppard and the Pirates need to find confidence shooting if they hope to down Houston and end a three-game skid.

After opening conference play with an 11-point victory over South Florida Dec. 28, the Pirates have dropped their last three contests against AAC foes. The 19-point loss to Temple Saturday concluded an ugly travel week that saw weather delays and a 3-point loss to UCF.

Houston (12-4, 3-1 AAC), meanwhile, is fresh off a loss of its own against Cincinnati, but has won three of its last four games, led by guards Robert Gray Jr. and Damyean Dotson. The guard duo leads the team in points with averages of 20.1 and 15.4, respectively.

For the Pirates, simulating the offensive output of Houston’s backcourt has been a key point of emphasis during practice.

“In practice we try to defend each other to the best of our abilities,” ECU guard B.J. Tyson said. “Our defense has gotten better in the game and has stopped a lot of people from scoring.”

But it hasn’t been the defense that has plagued the Pirates as of late. Averaging just 52.8 points per game, ECU sits 11th in the conference in scoring. Part of this, according to head coach Jeff Lebo, has been inconsistency in the backcourt’s shooting.

“We have to see the ball go through the basket,” Lebo said. “We have some guys that we were counting on who are having trouble shooting. Caleb (White) has been really consistent for three and a half years for us. B.J. has struggled and (Kentrell Barkley) has had trouble shooting from the perimeter.”

For the Pirates, finding their shooting stroke would increase their chances of upsetting the high-powered Cougars. Houston has allowed 81 3-point attempts, second most in the American.

Lebo said the team needs to find confidence and an identity shooting from the field and beyond the arc, but the Pirates’ 23.7 shooting percentage from 3 paints a bleak picture.

“Until we prove we can make it, they’re going to be packed in defensively against us and force us to shoot,” Lebo said. “We have to have multiple guys step up and shoot consistently.”

For Lebo, there’s only one way to get over the recent slump for ECU: keep shooting.

“As a player and a shooter, it wasn’t until I made them in a game situation that I got my confidence,” Lebo said. “I didn’t know in the back of my mind if I could do it in a game situation. They have to do that. We’ve spent more time shooting this year than I have any time.”

The message apparently hasn’t fallen on deaf ears as both Tyson and White relayed their coach’s words. For White and Tyson, both upperclassmen and leaders on the team, their need to “lead by example” can’t be understated.

“We’re definitely putting the work in,” White said. “It’s still a long season. It’s a move on to the next game kind of attitude. Everybody’s in high spirits.”

Wednesday’s game is slated to tip off at 6 p.m. in Minges Coliseum.