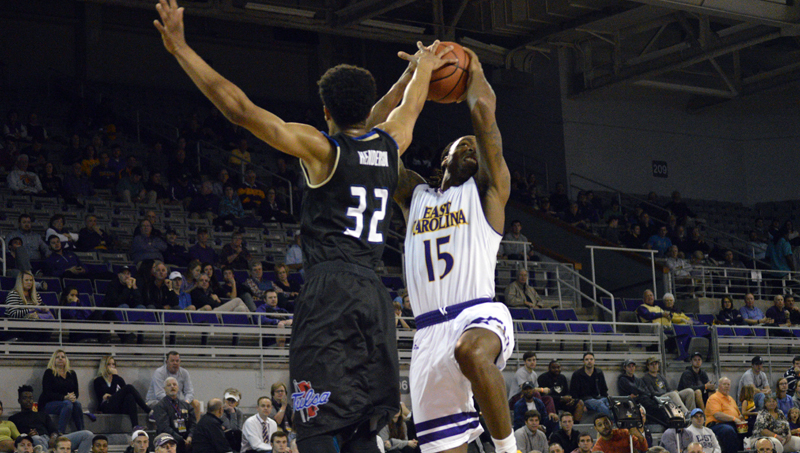 Kentrell Barkley drives to the rim during a game against Tulsa this season. He and Caleb White helped lead the charge as ECU beat Tulane in its last outing.

GREENVILLE — With seven games remaining on the conference, and season, schedule, the East Carolina men’s basketball team is heading down a crucial stretch to end the season.

The Pirates were dismantled last week at the hands of Southern Methodist in a 40-point loss, but ECU rebounded with its best effort, and highest offensive output, of the American Athletic Conference schedule. With a relatively weak portion of the conference schedule to close out the year for ECU, Saturday’s win may be just the push it needed heading into the conference tournament, which is just over a month away.

“I shared some of my own personal experiences, I told them about once as a coach losing the (Athletic Director) Jeff Compher’s alma mater, James Madison, by 45,” interim head coach Michael Perry said. “But we were cutting the nets down for an NCAA tournament appearance six weeks later. We talked about even here at East Carolina when we were down big in games and came back and won. So we talked about those types of examples and how that can happen for us.”

In the Pirates’ next two games, it will face South Florida (0-11 AAC) on the road and Temple (4-7 AAC) at home. While winless USF sits at the bottom of the conference, ECU is just one spot behind the Owls in the conference rankings, and a pair of wins against the lower-tier conference teams will push the Pirates closer to the middle of the pack.

Central Florida, Connecticut and Tulsa make up the current middle of the AAC and lay ahead on the conference schedule. The Pirates already have a win under their belt against Tulsa, and played both UCF and UConn well in road losses.

“(After SMU we knew we had to) just compete out here,” sophomore Kentrell Barkley said after Saturday’s win. “We didn’t take care of business (against SMU). It was more about ECU than about them. We just know we need to keep playing hard down the stretch.”

Tulane (1-10 AAC) and Houston (7-4) make up the rest of the conference schedule. The Pirates dropped the Green Wave last weekend. Houston took it to ECU in the second week of January with a 74-58 win. The fourth-ranked team in the conference will be just as difficult of a test this time around. A potential loss in the final game of the season will be softened as long as the Pirates take care of business against lower ranked teams in the conference.

Perhaps the brightest sign ahead for the Pirates came in the form of a 20-point outing from senior forward Caleb White after a month of frustrating offensive performances. He was 5-of-11 from the field, sank three 3-pointers and was 7-of-8 from the free throw line.

“It felt good to see the first couple (shots) go, gain some confidence,” White said. “(Head coach Jeff) Lebo came into practice a few times and just talked to me, tell me he was rooting for me. He told me I worked the hardest and I was one of the best shooters that he’d ever had and one of the best players he’s ever had. He just told me he was in my corner and that’s a good feeling.”

According to Perry, the Pirates may be just a couple weeks away from the return of junior guard and leading scorer B.J. Tyson. He has been sidelined for about a month with a knee injury. His return close to the conference tournament could be a critical turning point in the season.

The Pirates will play their next game Saturday against South Florida. Tipoff will be at 8 p.m. and the game will be broadcast on ESPNU.