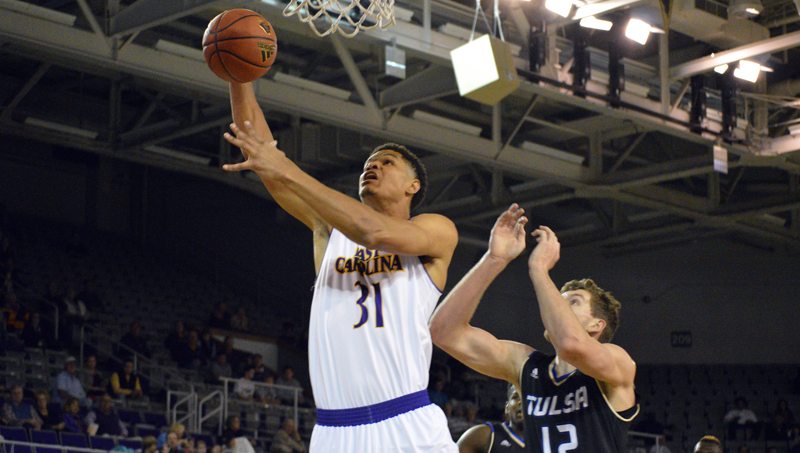 Andre Washington takes it to the rim during a conference game a few weeks back. Washington and the Pirates will look to take their show on the road and earn their first road win against a dismal South Florida club.

TAMPA, Fla. — East Carolina has perhaps its best chance of the season to pick up its first road victory against the last-place South Florida Bulls Saturday in Tampa, Florida.

The Pirates (11-13, 3-8 American Athletic Conference) are a week removed from a 74-65 victory over Tulane, but acting head coach Michael Perry expects the seven-day break to benefit his team.

“It’s been a great week,” Perry said. “Obviously, when you get a week off, you get a chance to take care of business both on the floor and off the floor, particularly when it comes to fine tuning sometimes.”

Perry said the Pirates have worked on tweaking offensive sets this week in preparation for the Bulls. ECU, which ranks No. 344 nationally with 61.6 points per game, scored its most points in conference play in the last game against Tulane.

Senior Caleb White had arguably his best game of the season last time out, scoring a team-high 20 points with three assists, four rebounds and three 3-pointers. The impressive performance by White is an encouraging sight for Perry, who said the team’s elder has struggled at times with his confidence.

The Pirates, who have struggled to shoot all season, have one of the staunchest defenses, not just in the conference, but also in the nation. Teams are shooting just 42.1 percent from the field against ECU — good for No. 9 in the country.

USF (6-17, 0-12 AAC), similarly to the Pirates, has struggled on the offensive side of the ball. Shooting just 45.9 percent, the Bulls’ underwhelming offense has a tough matchup against the Pirates’ smothering defense.

“When our shooting catches up and our offense catches up, that shows just how good we can be,” said White.

Still, though the Bulls have struggled throughout the season, the Pirates have faltered on the road time and again. Both teams will look to exercise some demons as USF goes for its first conference win and the Pirates search for their first on the road.

White said a win late in the season would be instrumental for the Pirates, who hope to piece together wins as the conference tournament approaches. For ECU, that continues with the Bulls.

“I need to produce the way I can produce and be the leader vocally,” White said. “Try to be consistent and show up and win.”

The Bulls, led by leading scorers Geno Thorpe (13.8 points per game) and Troy Holston (10.9), are riding an 11-game losing streak, which started against the Pirates Dec. 28 during the conference opener.

In that game, a 60-49 Pirate victory, Thrope had a team-high 18 points, but no other Bull player had more than five. Of course, that victory came in Minges Coliseum. Beating a team on the road is another challenge.

“Road trips in this league and a lot of leagues are very brutal,” Perry said. “We’re determined to change the history, not only this season but in past years. It’s a hurdle that we want to get over.”

Perry said leading scorer B.J. Tyson has been cleared for limited practice but he doesn’t have a timetable for his return.