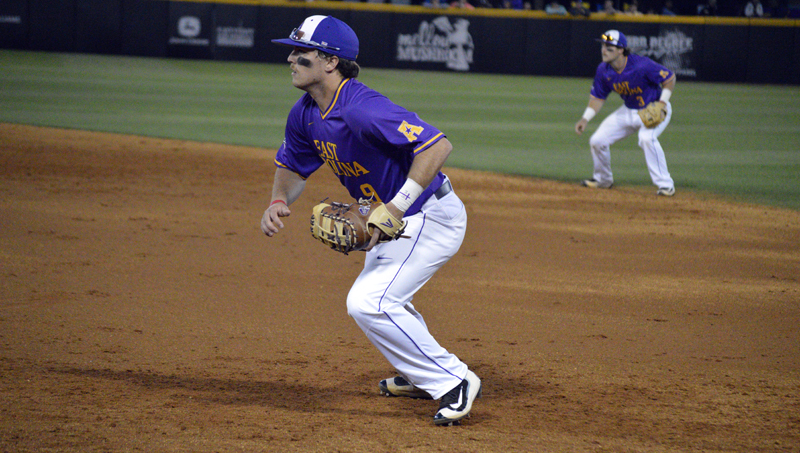 Charlie Yorgen is alert and ready to make a play at second base last season. Yorgen and the Pirates will be looking to play some of their best baseball right off the bat this weekend at Ole Miss.

OXFORD, Miss. — Thursday morning, the No. 6 East Carolina baseball team took off from Greenville and headed down to Oxford, Mississippi where the Pirates will open their season against Ole Miss with a three-game series.

It has been a preseason of accolades and honors for the Pirates, who have repeatedly been named a top-10 and top-15 team in the country. Players have been named to watch lists and dubbed preseason All-Americans almost weekly.

From the inside, it’s been all about “ignoring the noise” and now it’s time to see what this team can do.

The Pirates first taste of live game this season will be a more than formidable test. Last season, the Rebels rolled through a 40-win season and made a run at a Southeastern Conference championship, but came up just short. Ole Miss will be out for revenge this season after being bounced from a home-based regional in two games.

David Parkinson will start Friday’s 5 p.m. game on the mound and will square off against ECU ace Evan Kruczynski. Parkinson made nine starts (22 appearances) and posted a 2.78 ERA with 50 strikeouts to 24 walks. The junior-college transfer boasted a 5-3 record last season and recorded the second most innings on the team.

Sophomore James McArthur, who posted a 6-1 record last year, will take the ball Saturday against senior Jacob Wolfe. McArthur is a strikeout pitcher and had nearly nine strikeouts per nine innings last season, serving primarily as a late-weekend starter. Fellow sophomore Brady Feigl will throw Sunday. ECU head coach Cliff Godwin has not decided who will take the ball for the final game of the series.

“(The depth in the bullpen) is really the reason we didn’t announce a Sunday starter,” Godwin said. “We want to make sure our bullpen is as deep as possible going into Friday and Saturday then whoever hasn’t pitched will pitch on Sunday.”

The Pirates will certainly be able to makes games shorter this season with the strength of the bullpen. Joe Ingle is entering his third season as the Pirates’ closer. He has been named to the Stopper-of-the-Year watchlist. Sophomores Chris Holba, Sam Lanier and Matt Bridges will all anchor down the middle and late innings when needed. Lanier and Bridges both came on strong at the end of the year and put in impressive performances in the postseason.

Additionally, freshmen Jake Agnos and Trey Benton will see many innings this season and likely will compete for weekend and midweek starting spots as the season progresses.

With senior first baseman Bryce Harman out for the first series with a wrist injury, freshman Spencer Brickhouse will likely start in his place. Brickhouse has a large frame and he is slated to hit in the middle of the order this weekend, according to Godwin. Harman, a top-flight defensive first baseman, has been working with Brickhouse at the position, and Godwin said he has made bounds of improvement since arriving on campus.

He said he is looking forward to his first collegiate outing, but he is going to try to keep things loose and play his game.

“Going into Ole Miss, you know that the fans are very into it. They have a lot of diehard fans and I’m very excited to see that. Love to see people love the game of baseball,” Brickhouse said. “The expectations personally for me, I don’t feel them. I’ll do the best I can to compete and help the team out.”

The three-game set will be broadcast on the SEC Network and will be available through Watch ESPN.

Pirates not getting lost in the hype