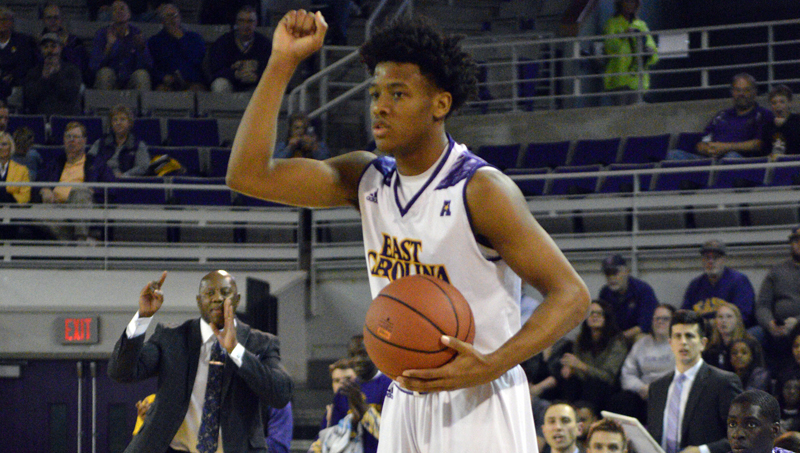 Freshman point guard Jeremy Sheppard gets instructions from interim coach Michael Perry and calls a play. An unlucky mishap down the stretch helped UCF edge the Pirates on Saturday, which was a microcosm of what has been an ill-fated campaign for ECU.

GREENVILLE — With just over a minute and a half left in the East Carolina basketball team’s eventual loss to Central Florida, a team that cannot seem to catch a break had its peak painful moment.

Freshman point guard Jeremy Shepard thought his team had been granted a timeout as ECU held a one point lead with around 1:40 left in the game. He let go of the ball and a Knight defender scooped the ball up and took it the other way to give his team a 57-56 lead. It was a mental lapse and it did not ultimately cost the Pirates the game, as they had plenty of time to recover, but failed to capitalize. The miscue was quite indicative of how this season has gone for ECU, though.

A season that has featured a stud senior lose his shooting rhythm for over a month, a head coach take a leave to have hip surgery and had its leading scorer miss almost a month with a leg injury has not been kind to the Pirates. With four games left on the conference schedule and two against the American Athletic Conference’s top four teams, it seems like another losing season is all but inevitable.

With restlessness coming from the fanbase over the coaching situation, it is still not yet time to jump ship on seventh-year head coach Jeff Lebo. It does not look like he will appear on the sideline for another game this season, but he should still be in the same spot at the head of the bench when next October rolls around. His contract runs through the 2020-21 season and, though not the entirety of the contract has to be honored, he has certainly earned another season.

In a particularly down year for the AAC, the Pirates may have had a shot at being a top-half of the conference team. With the return of Caleb White, B.J. Tyson, Kentrell Barkley and a myriad of strong depth players and perhaps Lebo’s best recruiting class, the team was strong enough to compete on paper. The Pirates still have one of the staunchest defenses in the nation, but the lack of scoring crushed them.

Between White’s inability to break out of his shooting slump and Tyson’s injury, the offense has been heavily slowed and just needed more time together to find a good rhythm. Most of these factors boil down to blind luck more than coaching.

Now, ECU still has the conference tournament left to make some noise. The Pirates currently sit in ninth out of 11 teams, which would match them up with Temple in the first round if the season ended today. They have a win against Temple to their name already, though the rest of the tournament would be no cakewalk as ECU would hypothetically play Southern Methodist in the second round. While a postseason run seems unlikely, anything is possible for a team with a defense like ECU’s.

There wasn’t much to be learned about the Pirates this year. There were some encouraging signs from the group of underclassmen and we saw flashes of what can be done at ECU with a full set of big men. The challenge will be to keep any semblance of positive momentum from this season going forward.