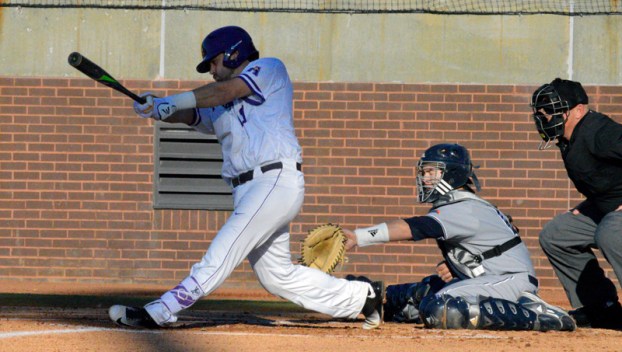 Travis Watkins puts everything into a swing during a game last season. The bats were there, and the pitching staff performed well across the board in ECU’s domination of LaSalle this past weekend.

Stepping Up: Pirates show their worth in decimation of LaSalle

Don’t look now, but the Pirates are back to wining.

After getting swept in the opening series against Ole Miss, East Carolina’s baseball team was left looking for answers to some familiar questions. Was added depth in the bullpen failing to get over the same hurdles as last season? Could this season’s Pirates find timely hitting with runners in scoring position?

Against La Salle, the Pirates put those questions to rest, even if temporarily, and earned a sweep of their own, marking their fourth-straight victory, and putting them at 4-3 in the young season.

It was a welcomed return to form for a team with self-admitted, sky-high expectations. We’ve heard it over and over — it’s Omaha or bust — but against the Rebels, the Pirates hardly looked like the team that was on the brink of a College World Series berth.

To say things went well against La Salle would be an understatement. A gritty Game 1 win led to Saturday and Sunday blowouts. By the time the Pirates put the Explorers to rest, they had outscored the visitors, 27-8.

It was the performance that was expected by both the team and the fans, especially following the narrow defeats in Oxford.

La Salle is no Ole Miss. If that wasn’t validated before last weekend’s series (the Explorers won just 15 games last season), it was surely justified following the blowout, as La Salle fell to 0-7 on the young season.

Though a total blowout of a small-time school is expected at this point, it was the fact that head coach Cliff Godwin answered the lingering questions from a season ago.

Freshman pitcher Trey Benton flashed an upper-80s fastball and a devastating breaking ball that kept La Salle hitters off balance all day. In the end, it culminated in a 10-strikeout performance and a total bounce back after getting shelled in his collegiate debut during ECU’s 8-6 loss to Ole Miss in Game 3.

Not outdone by solid starts by Benton and fellow starters Jacob Wolfe and Evan Kruczynski, the ECU bullpen had a bounce back of its own. Godwin used 10 different relievers in the series, taking advantage of early leads. In the end, the bullpen pitched 11 2/3 innings, allowing just seven hits and one earned run.

The bullpen’s work alone is perhaps an early indicator of how Godwin will utilize his relievers. Often overused last season, closer Joe Ingle has a chance to move into a more limited role, stopping inherited base runners and stretching himself out throughout the weekend.

It would have been easy to press the panic button following the sweep in Mississippi, but the La Salle performance tells us it’s too early to jump to conclusions.

Sure, these Pirates will likely have to win every series from here to host a regional, and yes, they have to find a way to win against ranked opponents.

But La Salle was a step in the right direction. That much is obvious. Now the question is whether or not the Pirates left their demons in Oxford.