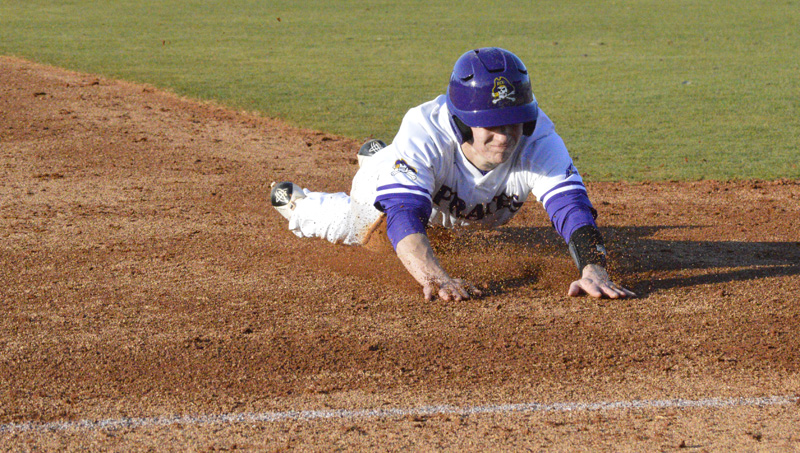 GREENVILLE — This weekend, the No. 9 East Carolina baseball team will take on a pair of in-state teams and a fellow top-25 member during the 14th annual Keith LeClair Classic inside Clark-LeClair Stadium.

While most students will take off for spring break, the Pirates will go to work, starting with a matchup against a 4-3 Western Carolina team Friday, which already has a win against a top-25 team under its belt. Bryan Sammons appeared in the Catamounts’ Friday matchup last weekend against Marshall. He tossed six innings of one-hit ball with nine strikeouts to four walks.

The key for Western comes at the plate, where it hits .340 as a team. The team has eight regular players batting above .300, with Brett Pope leading the way. Pope is hitting at a .429 clip while starting all seven games the team has played so far. Western’s problem, however, comes on the mound. Despite Sammons’ decent start to the season (2-0, 2.70 ERA and 13 strikeouts over as many innings), the rest of the pitching staff has not picked up the slack.

As a unit, the Catamounts hold an 8.56 ERA and have surrendered a staggering 13 home runs. If the Pirates can get to Sammons early, there may not be much to worry as Evan Kruczynski tries to hold the Western offense at bay.

Western has played a pair of ranked teams in Clemson and Coastal Carolina, and even earned a win on a Saturday against the defending national champions. The first pitch of ECU’s first game in the Classic will be at 4:30 p.m. on Friday against Western.

ECU has drawn No. 16 St. John’s for its Saturday matchup and will hope to end what may still be an undefeated season for the Red Storm come the second day of the Classic. The 8-0 squad has already knocked off a pair of ranked teams in Coastal, while playing in the same weekend tournament as Western Carolina and North Carolina.

Michael LoPresti will likely take the ball Saturday against ECU, as he has the past two weekends. The sophomore currently holds a 2.70 ERA and has thrown just five innings in each of his first two starts. The bullpen for the Red Storm has been a key early in the season. There are four relievers who have thrown at least two innings without allowing an earned run. Southpaw Turner French has turned in 5 1/3 innings this season without allowing a run. Another standout has been freshman Gavin Hollowell, who stands at 6-foot-7. Hollowell has faced 10 batters, struck out seven and allowed just one to reach base.

Offensively, Jesse Berardi leads the way for the Red Storm with a .424 average — one of four Red Storm starters batting over .400 currently. Berardi has 14 RBI early in the season with a pair of home runs, and a .667 slugging percentage. Another standout has been red-shirt junior John Valente, who is batting .486 in eight games so far. He bats leadoff and has only one extra-base hit, but his speed and his teammates behind him mitigate any problems.

The Pirates will wrap up with weekend against Appalachian State on Sunday. The Mountaineers enter the weekend at 4-4, and Luke Watts should be on the hill to close out the weekend for the visitors. Watts spun a gem last weekend against Gardner-Webb as he struck out seven and allowed just one run over seven frames. He is the team’s ERA leader despite pitching at the back end of the weekend rotation.

Unlike the high-powered offenses featured in the other two teams ECU will face this weekend, App has gotten off to a slow start at the dish. Calev Grubbs is the leading batter at .333 and has two doubles and an RBI on the season. As a team, App is hitting .221 and has just 26 RBI. With freshman Trey Benton the likely option for the Sunday start for ECU, and coming off of a strong outing against La Salle, he may find smooth sailing and another chance to build confidence on the mound.

The always emotional weekend honoring late ECU head coach Keith LeClair will be another chance for ECU to prove itself on the national stage with a big tilt against St. John’s and a pair of strong in-state opponents. The winner of the Classic is determined by overall record over the weekend. The Pirates have claimed the title each year since 2013.