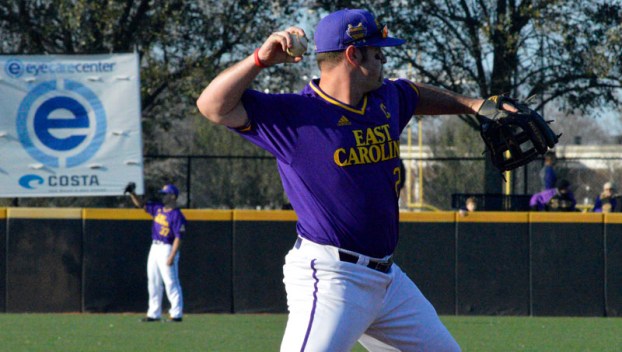 Third baseman Eric Tyler fields a ball during the Keith LeClair Classic. Considering Mercer’s offensive output, ECU’s pitching and the defense behind the mound will be key to this weekend’s series.

The streaking Pirates (13-4), who ride a three-game winning streak behind impressive wins over Duke and UNC Charlotte, will be without Friday starter Evan Kruczynski. The senior ace injured his left ankle in his last outing, which could force freshman Jake Agnos to take the bump in Game 1 against Mercer.

Agnos, who has appeared in four games with one start, sports a team-best .60 ERA and has allowed just one earned run in 15 innings pitched, most of which have come in a relief role. However, in his last start against Charlotte, Agnos walked four batters in six shutout innings, something that should have head coach Cliff Godwin’s full attention.

Still, even with the relatively unproven freshman on the mound for the first game, the Pirates are bolstered by a solid back-end of the rotation thanks to senior Jacob Wolfe (2-0) and freshman Trey Benton (2-0). Benton has a team-high 24 strikeouts in four starts while Wolfe sports a 3.32 ERA. In total, ECU’s staff is holding opposing teams to a meager .228 batting average.

The Pirates rotation will likely be countered by some combination of Mercer’s Chase Burks, Ryan Askew and Austin Cox. Burks, who serves as a relief pitcher and a starter, has a team-best 3.00 ERA and has 18 strikeouts in 18 innings pitched.

But things won’t be easy for the Mercer pitching staff. ECU’s offense is off to its expected rampant start to the season, boasting five players above .300, despite being without stud Dwanya Williams-Sutton. Williams-Sutton appeared in just the first four games before getting injured sliding into second base, but a return this weekend seems doubtful at best.

Still, though, the Pirates have had no problem finding power from its lineup. With a team-total 17 home runs, eight ECU players have notched dingers this season. Freshman first baseman Spencer Brickhouse and senior catcher Travis Watkins lead the team in homers with four and three, respectively.

Offensively, Mercer has the talent to match ECU’s firepower, which would lead to a high-scoring series. Collectively, the Bears have a staggering 31 home runs and 150 RBI through 18 games and, like the Pirates, boast a plethora of players batting above .300.

Danny Edgeworth leads the Bears’ potent offense with a .392 average and a .471 OBP. In addition to his stellar on base stats, Edgeworth has three homers and 17 RBI. Charlie Madde, Mercer’s power hitter, is off to a torrid start to the season, belting eight home runs and driving in 23 runs so far this season.

ECU’s two freshmen weekend starters, Agnos and Benton, will likely have their hands full with Mercer’s talented lineup, but the Pirates certainly don’t lack offensively, either.

The weekend gets underway with a doubleheader Friday. First pitch is scheduled by 4 p.m. The second game will begin 45 minutes after the conclusion of the first. ECU and Mercer will sit out Saturday and conclude the series on Sunday at 1 p.m.

GREENVILLE — The No. 8 East Carolina baseball team swept a doubleheader to salvage a series win against Charlotte on... read more