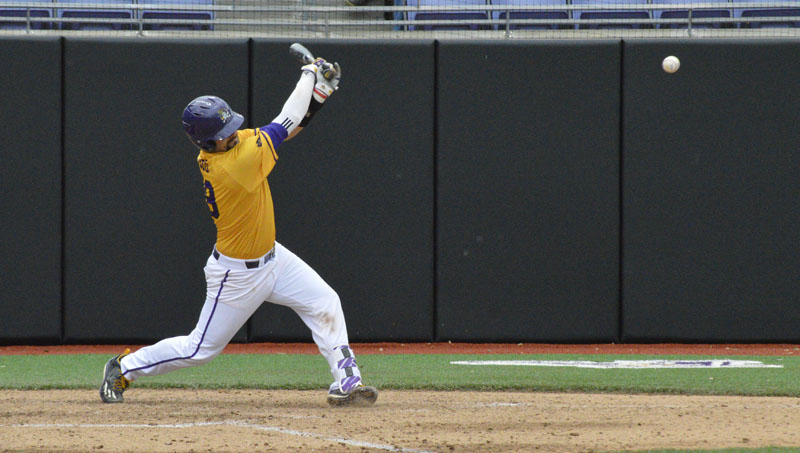 Travis Watkins sees the ball come off his bat in a game against Mercer last weekend. Watkins has been strong at the plate early in his senior season, and may be instrumental to ECU breaking out of its cold streak against Towson.

GREENVILLE — Coming off of a tough 6-2 loss against No. 9 North Carolina, the East Carolina baseball team, which has dropped four of its last five games, will look to rebound against Towson this weekend.

The Pirates’ offense has struggled against strong pitching in the past week. A pair of Towson weekend starters, Kevin Ross and Michael Adams, has rolled through their first four starts. The Tigers have played just two weekend series this year, so this weekend’s rotation seems unclear. However, Adams pitched against Virginia earlier this week, as did Alex Cuas.

That leaves Ross (2.14 ERA), Dean Stramara (3.32 ERA) and Skyler Morris (0.82 ERA) as the remaining starters left unused. Morris is the team’s ERA leader through two starts, though keeping runners off base has not been his forte so far this year as he has allowed a .256 opponent-batting average. Morris has been rolled out on Friday nights already this season and may take the ball against Trey Benton Friday night.

Ross could serve as a counter to Saturday starter Jake Agnos. Sunday is up in the air for the Pirates as senior Jacob Wolfe tossed over 50 pitches in Wednesday’s loss against North Carolina. Stramara is the Tigers’ strikeout leader as far as starters go and poses a threat with his efficiency.

Out of the bullpen, Kyle Stricker has six appearances, which is more than any pitcher on the staff. He is used in both long relief roles and as the team’s closer. With a 2.29 ERA, he sits third on the team and his 18 strikeouts ranks best on the squad.

Offensively, the Tigers have struggled mightily this season. As a team, they are batting .204 and have just four home runs. In 15 games, the team has produced just 61 runs. The Tigers’ top hitter, A.J. Gallo, is batting just .271 on the season with a home run and five RBI, while the team’s leading RBI getter is Colin Dyer with eight RBI. The offense continued to struggle in the midweek contests against No. 16 Virginia with a 3-2 loss and an 8-4 loss.

The Pirates are riding a cold streak, but this final weekend tune up before conference play may be a good stepping stone for the Pirates. Contrary to the Tigers, ECU has six healthy batters hitting over .300 and has slugged 21 home runs in its 22 games played. Senior Bryce Harman has started to make the full transition to playing each day at first base while freshman Spencer Brickhouse has taken on more of designated-hitting role.

Freshman outfielder Dusty Baker has come on of late with a spike in playing time for the Savannah, Georgia native. He is hitting .417 in 16 appearances (nine starts) with a pair of RBI. Travis Watkins has had a stellar start to his senior campaign with a .330 batting average and four home runs. He has driven in a team-high 22 runs.

Presumed Friday and Saturday starters Agnos and Benton sit in second and third, respectively, on the team in ERA. Chris Holba, who has made three starts with eight total appearances, is the team’s current ERA leader a 1.82 and leads the team in strikeouts with 36. Holba is a potential replacement for Wolfe on Sunday, should head coach Cliff Godwin decide to take Sunday in a different direction.

The three-game set will start Friday with a 6:30 p.m. first pitch before a 4 p.m. start Saturday and a 1 p.m. Sunday first pitch.