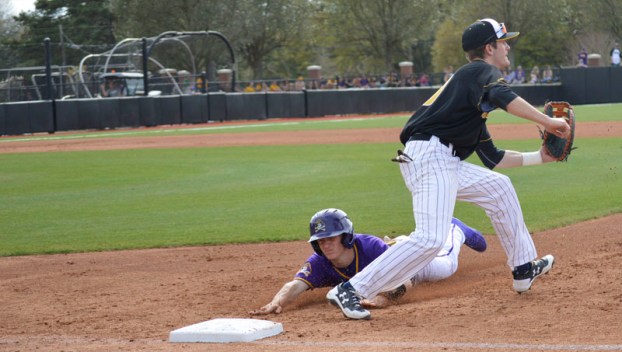 Turner Brown dives back to first base to avoid getting picked off during Saturday’s game against Towson. After losing four times in five games, Brown and the Pirates rebounded with a sweep in their last non-conference series.

GREENVILLE — East Carolina swept Towson this weekend to bounce back from its longest home losing streak since 2010.

The Pirates (17-8) rolled out three freshmen as starters over the weekend. Each pitched well, including Tyler Smith who made his first career start in Sunday’s win.

ECU freshmen shone bright in the sweep-clinching 12-7 win. Aside from Smith’s solid five-inning outing in which he conceded one earned run, Bryant Packard went 4-for-4 with two RBI, Spencer Brickhouse hit a home run in the fifth inning and Nick Barber produced a game-high three runs.

“It means a lot (for the freshmen to produce),” Packard said after Sunday’s win. “(Seniors) like (Evan Kruczynski), Bryce Harman and Kirk Morgan really get us ready for these situations, so there’s really no pressure when we get up there. It means a lot because we’re going to have the same guys for the next four years

ECU held an 8-2 lead headed into the seventh, but Towson’s (8-10) offense started to click in the last three frames. A four-run seventh followed by an additional run in the eighth made it a one-run game when the Pirates came to bat in the bottom half of the frame.

Towson reliever David Marriggi struggled through the bottom of the eighth as he surrendered four walks and was charged with all four runs in the frame. Packard picked up the only hit in the frame with a ground-rule double, though it did not produce a run. A walk by Barber brought in a run, and Drew Henrickson scored on a wild pitch while Travis Watkins and Turner Brown each plated teammates with sacrifice flies. The four runs were enough of a cushion for Joe Ingle, who earned his first save of the season as he worked through two innings to seal the win for ECU.

Saturday, the ECU offense got off to a slow start against Towson starter Kevin Ross, who allowed just two hits over 5 1/3 innings of work. Freshman hurler Trey Benton kept ECU in the game on the other end, however as he pushed through seven innings and allowed two runs on six hits while striking out 10.

The Pirates trailed 2-1 entering the seventh, but again had a massive seven-run inning. In the frame, Brown, Watkins, Eric Tyler and Luke Bolka each produced RBI in the inning. Bolka wrapped up the scoring for the inning as he belted a two-run home run to make it an 8-2 lead that would give ECU just enough to earn the win.

The bullpen struggled, however, as Matt Bridges surrendered three runs over his two innings of work. The win moved Benton to 3-0 on the season.

Friday, ECU won thanks to consistent and early offense. Things started with a three-run first inning that began with sophomore outfielder Dwanya William-Sutton opening the inning with an opposite-field. Williams-Sutton had missed the previous 18 games with a thumb injury and went 6-for-10 through the first two games of the series, before an 0-for-4 outing Sunday.

Williams-Sutton said he was a little nervous in his first at bat, but after recording an early hit, it helped change his mindset headed for the rest of the game.

“That gave me a lot of confidence,” Williams-Sutton said. “I’m a little negative. I was like ‘I don’t know if it’s going to hurt when I make contact.’ I took my first swing … then I just forgot about it, stepped back in the box and battled for my team.”

Charlie Yorgen, whose 190-game starting streak ended with a pair of off days after he was apparently banged up after a slide into second base in the series opener, went 3-for-4 on the day and drove in three runs. Tyler mirrored Yorgen’s statline with a 3-for-4, three-RBI day. Bryce Harman, who is riding a nine-game hit streak, was 2-for-4 Friday with a pair of RBI.

ECU will be back to work today as it takes on Liberty at home before taking on Connecticut to kick off conference play with a three-game set at home.

GREENVILLE — Coming off of a tough 6-2 loss against No. 9 North Carolina, the East Carolina baseball team, which... read more