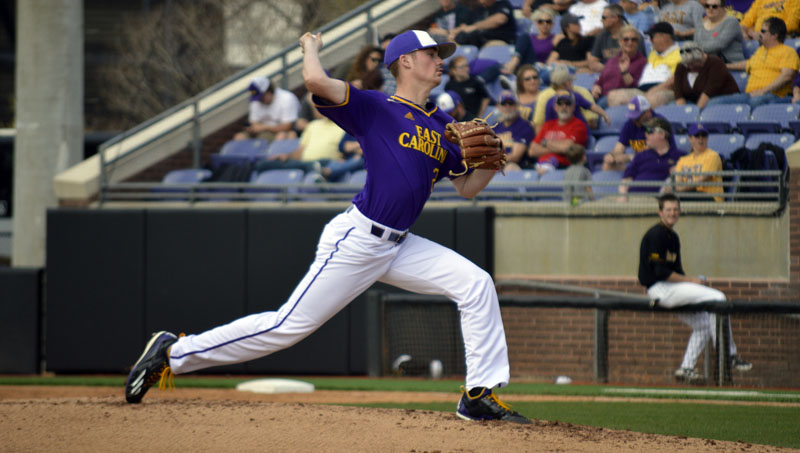 Trey Benton throws to a Towson batter last weekend. Benton was one of three freshmen to start on the mound during the weekend. The Pirates will look to get another strong weekend from the youthful staff.

GREENVILLE — The East Carolina baseball team will kick off its conference slate of games this weekend against Connecticut after an 18-8 run through the non-conference portion of the schedule.

The Huskies (13-9) had a notable win against Texas and a pair of victories against UC Davis in their non-conference run. In the past three seasons, UConn had relied heavily on 2016 MLB Draftee Anthony Kay in its weekend rotation, but with the southpaw now in the minor leagues for the New York Mets, the front end of the rotation has been difficult to nail down.

The past three weekends, three different starters have thrown out the first pitch of the series for UConn, each struggling to get the get the job done. Tim Cate (1-1) has been the most successful of the bunch, with a 3.38 ERA over his three starts. In total, the sophomore has thrown just 16 innings this season. Another weekend arm used in the past by UConn has been P.J. Poulin, who has made two starts in his eight appearances. Poulin has struggled to make his outings count, lasting just 8 1/3 innings and seeing his ERA balloon to 6.48. Lastly, Ronnie Rossomando has taken a pair of weekend starts, taking him to a 4.20 ERA in 11 total appearances.

The most consistent starter, and most used starter, for UConn has been William Montgomerie. The junior righty has made six starts and holds a 3.08 ERA while leading the team in virtually every pitching category. His 57 strikeouts are 29 more than any other member of the pitching staff.

Offensively, the Huskies don’t pose much of a threat either, with a .259 team batting average and just seven home runs. Perhaps most exciting for the northern-most baseball member of the American Athletic Conference is the start of redshirt freshman Jack Lambrecht. Lambrecht redshirted through his first year in Stoors and missed the first 17 games of the 2017 season with a hamate bone injury. In his first four games this year, the second baseman has made an immediate impact. He is hitting a team-high .385 with five hits and five runs in 13 at bats.

Joining Lambrecht in the middle infield, and also as a leading hitter, is Anthony Prato. A true freshman, Prato is first on the team in batting of players that have appeared in most games. With a .337 batting average and a home run to his name, Prato is a threat at the dish and on the base paths, where he has been caught stealing just once in 10 attempts.

It will be a battle of young faces between the youthful top of the UConn lineup and the again projected freshmen slate of pitchers from ECU. Last weekend, the No. 25 Pirates rolled out three freshmen starters in Jake Agnos, Trey Benton and Tyler Smith.

With Jacob Wolfe taking the ball in a midweek win against Liberty, he will likely not be used this weekend. Sophomore Chris Holba is again an option as a Sunday starter instead of Smith, though that is dependent on how much use the bullpen gets this weekend.

The Pirates will look to get conference play started on the right foot this weekend, with Game One starting at 6:30 p.m. Friday, Saturday’s first pitch will be at 4 p.m. and the series finale is set for noon Sunday.