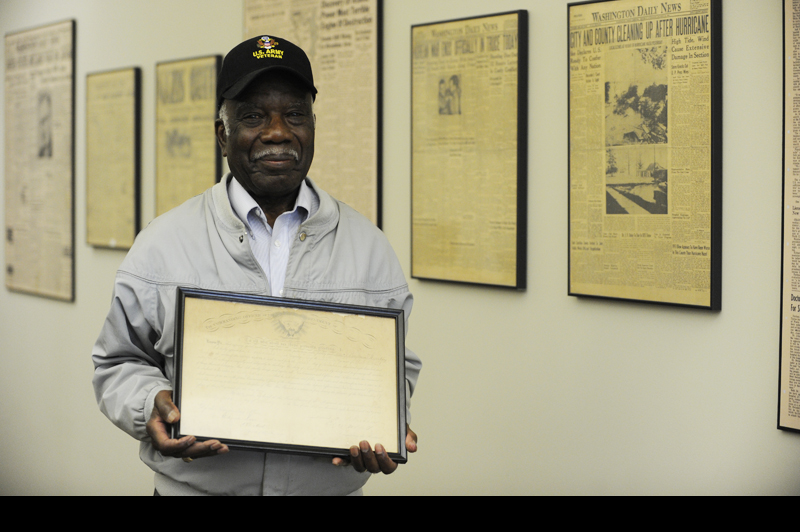 Saturday, a highway historical marker honoring the U.S. Colored Troops of the Civil War — a regiment started in Washington — will be dedicated and unveiled next to the Washington Waterfront Underground Railroad Museum. Among the many people attending will be a man by the name of Archie Harding, a Washington native, U.S. Army veteran and the great-grandson of Benjamin Harding who, at the age of 21, joined the 35th Regiment of the U.S. Colored Troops on June 16, 1863.

Proof of his great-grandfather’s service is in the only remaining Civil War memorabilia the Harding family has: an order assigning Benjamin Harding the rank of corporal dated May 31, 1866. It’s a framed piece of history, one that Archie Harding’s mother kept safe. Now Archie Harding fills that role.

“When Ben Harding died — I wasn’t around then — my mother took the information and put it in her trunk, and we would go back to it from time to time. And then we started having family reunions — it would come out at the family reunions,” Archie Harding said.

The regular reminder that their ancestor served in the Union Army has had a lasting impact on the Harding family, engendering a family tradition of military service. Archie Harding, two of his brothers, his two sons and numerous nieces and nephews have all served their country in various branches of the military, he said.

When Archie Harding saw a Washington Daily News editorial written about the unveiling of the highway historical marker by the North Carolina Department of Natural and Cultural Resources, he immediately made the connection to his great-grandfather.

“I saw the editorial, and I saw information about it being the 35th regiment, and I thought, ‘My great-grandfather was in it.’ It was the same information,” he said. 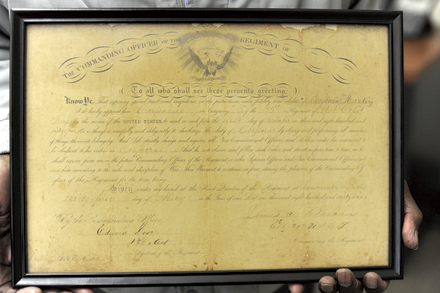 CLOSER LOOK: “Know ye that reposing special trust and confidence in the patriotism, valor, fidelity and abilities of Benjamin Harding, I do hereby appoint him Corporal in Company ‘B’ of the 35th regiment of the U.S. Colored Troops in the service of the United States…” the faded paper reads.

Harding said it was important to make that connection and to show how one’s ancestors played a prominent role in history.

“Well, I think the most important thing is to let the public know how blacks have contributed over the years. Instead of it being in somebody’s trunk — to let people know — and how it influenced the generations on down in seeing how successful he was in what he did.”

Benjamin Harding was a success. He used his severance pay to buy 20 acres of land, married Sarah Winfield and had seven children. Over the years, other items from his time in the Army disappeared — his musket, bayonet, army blanket, mess kit, canteen, shovel, army coat and forage coat — so Archie Harding holds the Benjamin Harding’s framed order close. He has plans to pass it along to the next keeper of family history.

“I’m 83 years old, and I’ve been trying to give it to somebody while my mind is still relatively active,” he said. “I think it will be my baby brother, Fenner Harding.”

The public is invited to attend the highway historical marker dedication ceremony in the Washington Civic Center at 2 p.m. Saturday and the marker unveiling on the grounds at 3 p.m.