Houston proves too much for ECU to handle 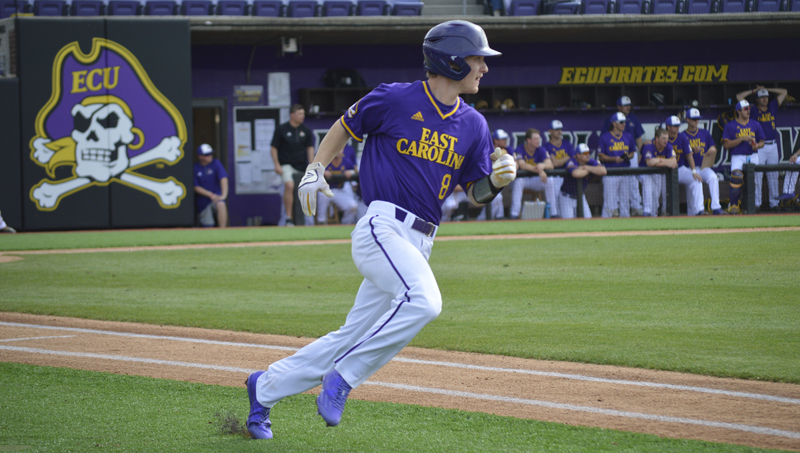 Turner Brown darts for first base during a game against Towson. Brown and ECU’s offense couldn’t manufacture much to keep up with Houston.

HOUSTON — The East Carolina baseball team suffered a three-game sweep at the hands of No. 14 Houston over the weekend as the Pirates’ losing streak reached seven-straight games.

It was another frustrating weekend as the Cougars (23-8, 4-2 American Athletic Conference) lit up ECU (18-15, 0-6 AAC) pitching for 34 runs over the three games, while ECU struck for 10 — immensely aided by a six-run game Sunday.

Luke Bolka led the way with a three-run home run in the second inning, but a tough two-inning start from Tyler Smith, in which he allowed three runs, slowed the Pirates. Relief performances from Matt Bridges and Sam Lanier ultimately doomed what was the closest game of the weekend.

Lanier allowed a solo home run to Joe Davis in the third and loaded the bases before being pulled in the fourth before Bridges, who took the loss, took over. He walked the first batter he faced before eventually getting out of the inning. The sophomore cruised through until the sixth when he ran into trouble. He allowed two hits and two walks, resulting in two runs, before he was pulled for Jake Agnos. Agnos promptly allowed a two-run triple to leave Bridges with a four-earned-run outing.

The Pirate offense did all it could and struck for all six of its runs against Cougars starter John King. It did not see the same success against his relief, Fred Villarreal. The true freshman allowed just one hit over 4 2/3 innings of work while striking out two without a walk.

The loss sealed the sweep and left ECU looking forward to a midweek contest against UNC Wilmington Tuesday.

Saturday, freshman Trey Benton was exposed in his 4 2/3 innings of work. He did allow just one hit over the first three innings of work, but after a two-run home run by Corey Julks in the fourth, things started to unravel. He got out of the fourth inning, but allowed another home run in the fifth, this one of the three-run variety by Davis. Ryan Ross took over and hit the first batter he faced to load the bases before allowing a bases-clearing triple to cap off a six-run fifth inning for Houston.

Travis Watkins plated the only run of the day for ECU with an RBI single that brought Eric Tyler around to score.

The series promptly started with a scare Friday as sophomore starting pitcher Chris Holba was hit in the head with a line drive. Holba was taken to a nearby hospital and is reportedly out of the hospital.

On the baseball side of things, Agnos took over in the second with an early two-run lead, but with off-the-field distractions for ECU, coupled with one of the strongest offenses in the country, the Pirates allowed seven runs in the second inning. Agnos surrendered three unearned runs, aided by an error from Bryant Packard. After a quick two outs, he was pulled in favor of Joe Ingle, who allowed six runs, three earned, over 2/3 of an inning. Davis Kirkpatrick, Luke Bolka and West Covington handled the rest of the relief duties, with Kirkpatrick and Bolka allowing three earned runs each, while Bolka allowed an unearned run as well.

T.J. Riles and Bryce Harman were the only Pirates with multi-hit games Friday, and each recorded the only two RBI of the game for ECU.

After a game against Wilmington in the midweek, ECU will host Central Florida at Clark-LeClair Stadium this weekend for a three-game AAC set.