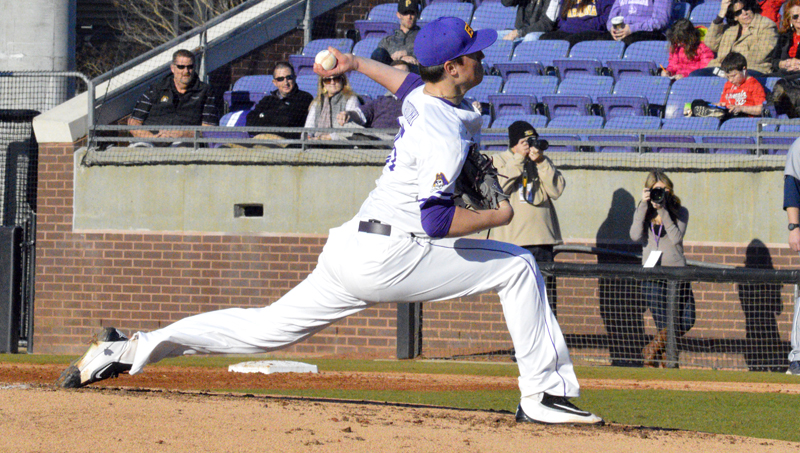 Evan Kruczynski throws a pitch in a game last season. Kruczynski made his first start since early March, but even the senior lefty wasn’t enough to power ECU to its first conference win.

GREENVILLE — Despite Evan Kruczynski’s valiant effort on the hill in his first start back since March 3, the East Carolina baseball team couldn’t avoid the sweep against Central Florida with a 7-0 loss Saturday afternoon.

The ECU offense again failed to gain any traction with runners on base, going 0-for-11 with runners on against the Knights’ pitching staff. UCF (26-11, 5-4 American Athletic Conference) starter Joseph Sheridan cruised through 7 2/3 innings while allowing four hits and no runs. Despite throwing 111 pitches, he showed few signs of fatigue and ECU (19-18, 0-9 AAC) could not capitalize on the high pitch count.

ECU’s lack of execution with runners on base was a theme for the weekend.

“It’s something different every day (with the offense) and we’ve got to execute our plan,” said ECU head coach Cliff Godwin, who wore his heart on his sleeve. “We watch video, talk about what the pitcher is going to try to do to us. If you look at our at-bats, one guy would execute the plan and the next guy would not. We just didn’t string together enough at bats.”

In his first game back, Kruczynski gave ECU the start it needed while being held on a tight leash in his first start in about a month and half. The big southpaw lasted five innings and surrendered one run on three hits with a pair of strikeouts without a walk.

“We’re searching right now. It’s a tough time for us for sure,” an emotional Kruczynski said after the loss. “We’ve just got to keep going at it every day. There’s nothing we’re doing wrong in our preparation or effort or any of that. Truly, I love these guys, and we’re fighting right now.”

The lone run allowed by Kruczynski came in the third inning when he allowed a leadoff double to Kam Gellinger who moved to third on a ground out and came around to score on a Luke Hamblin sacrifice fly.

As the offense struggled to help out the pitching staff, the bullpen continued its difficult season while allowing six runs after taking over for Kruczynski. Senior Kirk Morgan started the sixth inning on the hill and allowed a single. Leadoff man Hamblin reached on an error by second baseman Charlie Yorgen and Morgan was pulled in favor of Matt Bridges.

UCF’s Eli Putnam promptly chopped one over the head of Bridges, and Anthony George scored from third on the play to give UCF a 2-0 lead. Matthew Mike drove in a run with an RBI double off Bridges. He recovered from there and eventually got out of a bases-loaded situation.

The bullpen, for the weekend, allowed 22 runs and took two of the three ECU losses in the sweep.

Those insurance runs in the sixth would be enough for the Central Florida pitching staff, though, as ECU recorded just four hits in the game.

For ECU, the bullpen crumbled in losses on Thursday and Friday nights to start the downward spiral of the weekend. After jumping out to a 7-1 lead on the back of a fourth-inning Yorgen grand slam, the Pirates were sailing smoothly early on. Jake Agnos pitched well through four innings and allowed one run on three hits, but walked five.

Jacob Wolfe pitched an inning out of the bullpen and allowed three runs on a pair of home runs that cut the lead to 7-4. Lanier pitched the sixth and seventh innings and allowed just one run to keep the Pirates in the game. Tyler Smith allowed a two-run single off the bat of Rylan Thomas to tie the game with two outs to force extra innings.

Again with two outs, Brennan Bozeman gave UCF just enough to pull off a major comeback win with an RBI single to plate Ryan Crile in the 11th inning.

Friday’s loss came on the back of a bullpen implosion that included a three-hit, nine-run eighth inning. Trey Benton rolled through seven innings but struggled when he came out for the eighth inning. He struck out a man before allowing a double. Ryan Ross took over and allowed a hit to the only batter he faced before West Covington took over. Covington hit a man to load the bases, walked in a run and two runs came in on a Yorgen fielding error. Back-to-back walks plated another run and gave way for Tyler Smith to come in and allow a grand slam by Gellinger.

ECU hit a pair of home runs in the loss with one by Eric Tyler and another in the ninth off the bat of Bryce Harman.

With the sweep, ECU is left still searching for its first AAC win of the season and will hope to accomplish that next weekend against Cincinnati on the road.