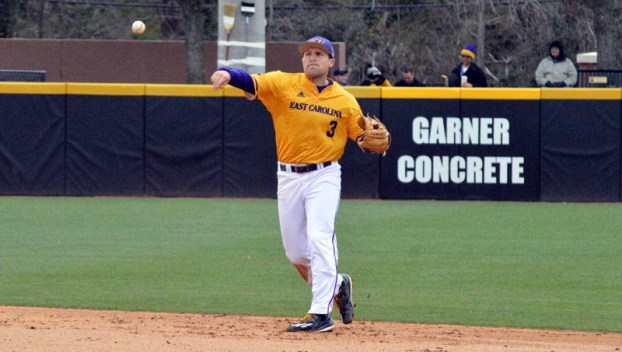 Senior second baseman Charlie Yorgen fields a ball and makes the throw to first. He made plays at the plate, going 5-for-5, in a much-needed midweek win over UNC-Wilmington.

CINCINNATI, Ohio — Still searching for its first American Athletic Conference victory of the season, the East Carolina baseball team will take to the road to face off with Cincinnati in a three-game set beginning Friday.

The Pirates, who got a little offensive confidence back in a midweek win against UNC-Wilmington, will try to jump out to a good start Friday against Bearcats’ starter Andrew Zellner.

Zellner has struggled this year with a 2-3 record in 10 appearances with a 5.66 ERA. He has failed to reach the fourth inning in his last three weekend starts. The ECU offense, which struck for a season-high 18 hits against Wilmington, could use a big offensive start the series.

Senior Charlie Yorgen stepped up large for ECU in the win and was a perfect 5-for-5 and reached on a walk in his other plate appearance. Travis Watkins and Dwanya Williams-Sutton, who again returned from injury, each were 2-for-5 Tuesday while Williams-Sutton hit a home run. Luke Bolka was 2-for-2 with a home run and Bryce Harman added another homer while going 3-for-4.

The Pirates desperately need clutch hitting after struggling to get anything going in important situations during a weekend sweep at the hands of Central Florida. The emotional ECU team will certainly be using the difficult weekend as motivation from here out.

The Cincinnati offense has been prone to lapses this season with a team average sitting at .246 and just one player hitting over .300. A.J. Bumpass, a sophomore outfielder for the Bearcats, leads the offense with a .321 average and three home runs. His speed and power are best shown in his four triples on the season. Junior Ryan Noda provides the most offensive pop for Cincinnati with six home runs and 17 RBI on the year.

Overall, the offense has not been enough to make up for a struggling weekend starting staff, all of which hold an ERA over three. Saturday starter J.T. Perez is just 1-5 this season with a 4.44 ERA. He got back on track in his last start against South Florida last week as he ran through 5 2/3 innings and allowed just two earned runs. However, his control problems still manifested themselves with three walks to just one strikeout to add to his team-leading 19 walks.

Sunday starter David Orndorff has had the strongest season of the starters with a 3.29 ERA and a 2-3 record. He started the season in the bullpen, but other weekend starters gave way to Orndorff. He suffered only the loss of last weekend against USF while allowing four runs over 7 2/3 innings.

The bullpen has picked up some slack from the starters with Jarod Yoakam leading the way with a 2.67 ERA over 18 appearances and 32 2/3 innings pitched. A.J. Kullman has been the most used reliever and has a team-high five wins despite a 4.09 ERA.

ECU fans should expect to have Evan Kruczynski back on the hill for the weekend after a strong five-inning, one-run outing last Saturday against Central Florida.

The road series will kickoff Friday at 6 p.m. while Saturday’s game is slated to start at 4 p.m. before the series finale at noon Sunday.

GREENVILLE — Despite Evan Kruczynski’s valiant effort on the hill in his first start back since March 3, the East... read more