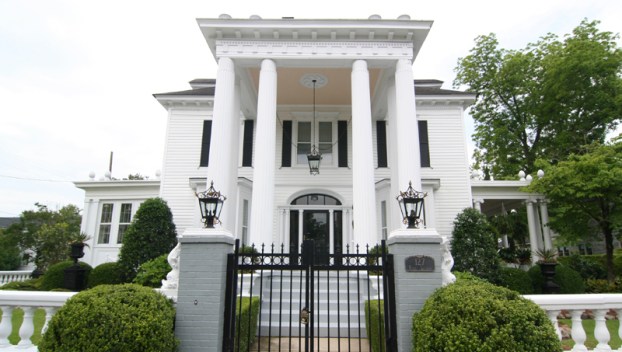 PRESERVATION PERSONIFIED: Attorney Don Stroud’s East Second Street home is a prime example of the need to preserve structures that tell the tale of Washington’s history. Stroud has spent decades restoring the home to its former glory.

Books can be consulted to learn about Washington’s role in history, but the town’s structures have a far more important role in visually defining its sense of place and time.

“Washington’s past is just as important as its future,” Washington Area Historic Foundation President Don Stroud wrote in an email. “In fact, its very future is dependent on preserving its past. Our shared history is much more than an old house. It is the combination of a rich fabric of homes, gardens, landscapes, churches, commercial buildings, culture and a beautiful, blue river. We are blessed to have a diverse Historic District whose assets range from Colonial to the mid Twentieth Century.”

That’s not the case in many cities across the U.S., where history has been erased by commercial development, according to Emily Rebert, the City of Washington’s community development planner. She’s seen it happen in many towns in her home state of Pennsylvania.

“People don’t go to Philadelphia for the historic districts. Right now, a bunch of row houses is up for demolition — there’s no continuity. You have some of these really, really old, important structures and behind it you have a skyscraper.”

Continuity is the goal, and that goal is wrapped around four aspects of preservation: preservation itself, an example of which would be Tarboro’s national historic landmark Coolmore Plantation, its original structure and furnishings preserved; restoration, which is restoring a structure with museum-like quality to a particular period in time; rehabilitation, meaning, to readapt the building to accommodate current use; and reconstruction, an example of which is Colonial Williamsburg — 20 percent of its structures are original and 80 percent have been recreated, Rebert said.

She said Washington falls into the rehabilitation category — its structures have changed and adapted through the years. Instead of the focus being primarily on the distant past, other structures are contributing to Washington’s historic feel, including what’s referred to as “infill,” such as small, brick ranch houses built in the historic district during the 1950s and 1960s.

“When you think about a beautiful, small, historic town, and you want to get that grassroots (feeling) — you want to have that feeling. It’s not just about the aesthetics. You want to have a feel. It’s about individual identity and the beauty. That’s what makes Washington unique,” Rebert said. “Historic towns like Washington, they offer continuity, and it gives you a feeling of being a part of something. You have an emotional bond, and you get a sense of stability.”

“When you lose places, you start losing that sense of stability.”

Rebert can recall many examples of older Washington residents telling her about buildings and homes no longer in existence due to urban renewal, decay and demolition — structures that made a lasting impression.

“These people who tell me stories, they can remember the feel it, what it looks like. But I’m not from here, so when I come to Bridge Street, I don’t see the DeMille Building, I just see concrete,” Rebert said. “(Preservation) brings you individual identity, civic identity.”

“Historic rehabs are 60- to 70-percent labor, so more money stays in the local economy. You are keeping the labor, the work, the money, in your own town,” Rebert said. “Rehabbing vacant or unused buildings, they can add to the tax rolls.”

But labor is not the only economic factor involved in historic preservation. It’s the fact that people are drawn to the ambience of these small, historic towns that cropped up in rural areas, their locations and growth born of industry and commerce — towns such as Washington with its sheltered port, lumber factories and railroads, and Tarboro, which rose to prominence with steamboats’ ability to deliver goods, and people, farther inland.

“They call it cultural heritage tourism. As far as I’m concerned, that’s what keeps this town alive. In 50 years, if you don’t have an economy to keep your people here, your library and your churches are going to be empty,” Rebert said, then recounted a phrase she learned in college at the University of Pennsylvania: things that last are worth keeping, things worth keeping last.

“When you are in historic preservation, you’re doing something that’s bigger than yourself,” she said. “You’re honoring the past and ancestors; in the present, living a more enriched life and contributing to the stabilization of your community; for the future, preserving your heritage for future generations.”

It’s a point on which Stroud agrees.

“If we are to continue to prosper economically and culturally we must preserve and protect our past,” Stroud wrote.

Rebert said she’s hoping more people will get involved in efforts to preserve the town’s structures, and also preserve the economic boon of a budding tourism industry.