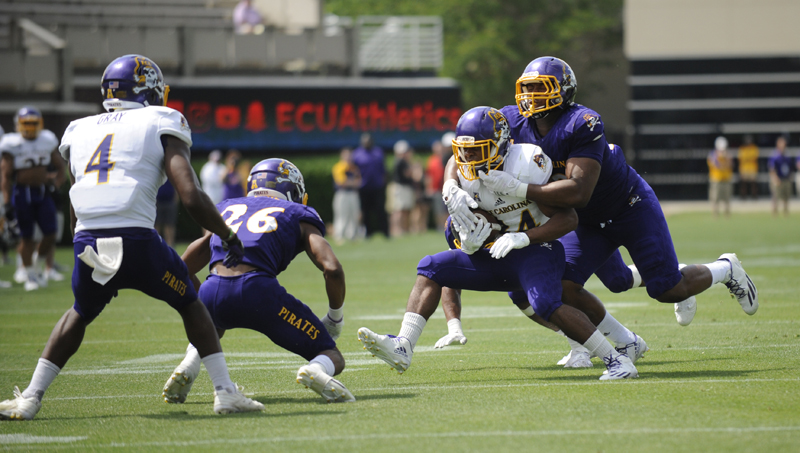 Derrell Scott is taken down by defenders during ECU’s Purple-Gold spring scrimmage. The Pirate defense seemed to adapt well to its new scheme.

GREENVILLE — Entering the 2017 college football season, East Carolina fans will notice a new formation on the defensive side of the football.

Coming off a frustrating 3-9 2016 season and just eight sacks, the Pirates hope switching to a 4-2-5 defensive scheme will help bring more pressure on the quarterback while avoiding giving up some of the home-run plays it surrendered last year.

One of the bigger changes for an individual on the defensive side will be in the form of Yiannis Bowden. Bowden, a rising junior, started as an outside linebacker in the 2016 campaign. In the coming season, however, he will line up in a three-point stance in the four-man front. For him, though, it’s getting back to his comfort zone.

“I actually like the new defense that we’re in because I’m in a three-point stance like I was in high school,” Bowden said after the team’s annual Purple-Gold game. “So it’s coming along and I think it’s going pretty well.” Junior cornerback Corey Seargent is looking to take another step forward after a decent sophomore season. An important piece of an improvement for the entire secondary will be an improved pass rush from the defensive front.

Seargent said the switch has been comfortable for the defense through spring and it is ready to endure a long summer of training led by players.

“It’s been fun with the transition,” Seargent said. He had an interception on a pass intended for Jimmy Williams in the aforementioned scrimmage. “I like playing new defenses and learning new plays and stuff like that so it’s been fun.”

Seargent said the players held each other accountable during spring ball to get into the film room to break down what the team is trying to do defensively and how opponents will try to execute against the group. Now, with coaches unavailable to be on the field with players during summer workouts, it will be up to the older players to ensure that same mentality is carried over to the fall season.

From the offensive side, current slated starting quarterback Gardner Minshew said he’s seen improvement from the defensive players throughout the shift to the 4-2-5. Minshew said he has been encouraged by the work the defense has put in over the spring. He believes the group will be better set for the coming season with the scheme change under defensive coordinator Kenwick Thompson.

“We’ve got a great group of guys (on defense) and they’ve made it hard all spring and they played well today,” Minshew said after throwing for 265 yards with two touchdowns and an interception. “I’m very excited to see what they do this season. Definitely happy to be competing with them and not against them come the fall.”

ECU’s second-year head coach Scottie Montgomery gave high praise to the defense quickly when meeting with the media after the official end of spring practice for the ECU football team. He highlighted the defensive backs in coverage but was most impressed with the front six.

The players will take over full-time leadership roles in workouts over the summer before fall camp officially opens in August. The Pirates will open the 2016 season with a game against defending Football Championship Subdivision champions James Madison at Dowdy-Ficklen Stadium on Sept. 2.