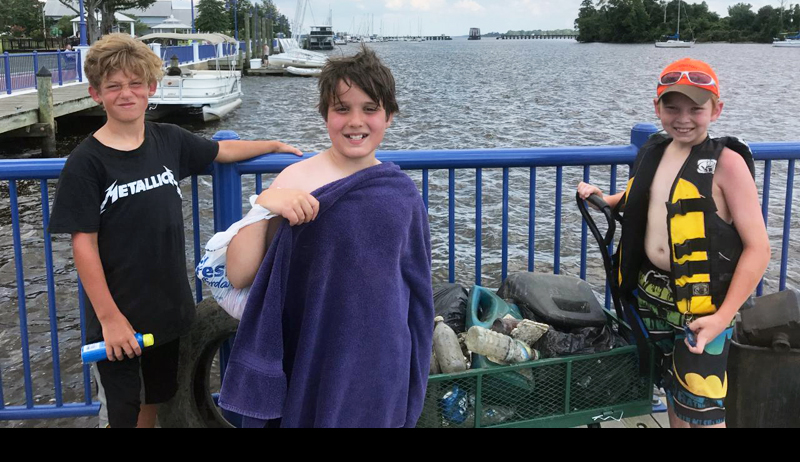 BIG HAUL: Three sailing school students display the trash they collected while sailing. Sailors at the Little Washington Sailing School are encouraged to pick up trash while on the river as part of the ‘Trash Wars.’ (Marah Dahn)

At the Little Washington Sailing School, ‘Trash Wars’ teach kids how to have fun while being stewards of their environment.

“’Trash Wars’ is a river clean-up competition the kids do every week,” said LWSS director Kevin Clancy. “The kids pick up pieces of trash while they’re sailing. At the end of the week they count it all up and whoever has the most trash is the champion.”

Clancy said the 18 kids in the sailing class enjoy picking up trash because it is not a chore.

“If you told a kid to go out and pick up trash for an hour, you would hear some grumbling,” he said. “But for these kids, it’s a competition. They’re sailing around and picking up trash. They’re having fun.”

Last week, one sailor set a record for the most trash picked up in a day — 43 pieces.

That is more trash than is normally picked up by the whole class in a week, Clancy said.

That big haul led the way for a productive week from the class. Clancy estimated the class collected more than 100 pieces of trash last week.

While most pieces of trash are small, kids sometimes pull large items out of the water, such as a tire and an American flag still attached to a pole. The flag is currently hanging up in the class building, Clancy said.

“It’s cool to see the kids riding their boats over to this junk. There’s a lot of cool stuff going on other than sailing. It’s learning how to live on the planet,” he said.

The young sailors have been cleaning up trash all summer. The sailing school opened in June and held its graduation Friday, Clancy said.

During that time, they are constantly sailing and picking up trash. Each day they set out for a specific location, such as Roanoke Christian Service Camp or Cypress Landing. Along the way, they are competing to pick up the most trash. At the end of the week the winner is crowned and rewarded with a gift card to Main Street Scoops.

The idea for the competition came from Marah Dahn, a 25-year-old instructor at the sailing school, Clancy said.

He said he believes it is consistent with what he views as the environmental component of sailing, and the kids are catching on to the lesson of environmental responsibility.

One young sailor, inspired by the ‘Trash Wars,’ told Clancy she wished there were sailing schools everywhere, because it could really make a difference in the world.

“That’s just what sailing brings, that love for the water and the wind and the elements,” Clancy said. “You’ve got to use them to go from point A to point B, just like sailors have been doing since the beginning of time.”