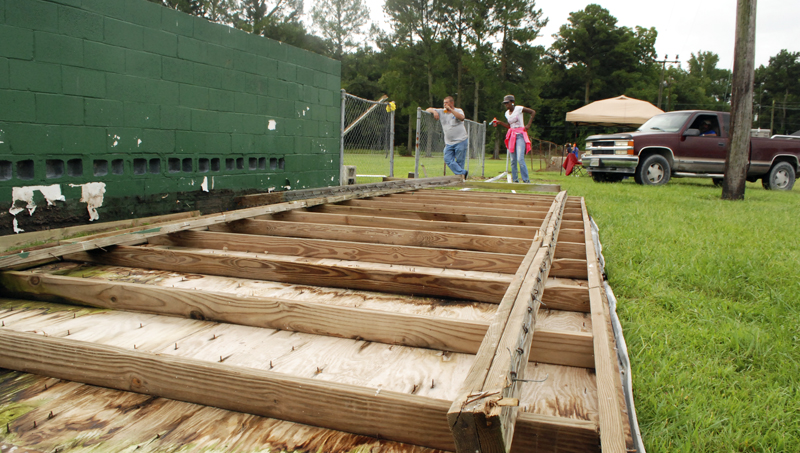 ROOF WORK: With some persistence, volunteers were able to safely remove the roof off of an old dugout at the Aurora Recreation Complex. (Caroline Hudson/Daily News)

AURORA — It was a good weekend in Aurora.

Town residents, commissioners and volunteers converged on the old ballpark beside S.W. Snowden Elementary School on Saturday to give it a much-needed makeover.

Kate B. Reynolds Charitable Trust awarded a $147,000 grant to the Aurora Recreation Department to assist with the project, as part of the Healthy Places NC initiative, which strives to bring health resources to rural areas.

Saturday saw a group of volunteers taking down old dugouts, removing worn-out fences and repainting the concessions and bathroom areas. Future projects will include installation of new dugouts and fences, field lights, updated plumbing and food-related equipment, such as a refrigerator and blenders.

“This April, the town approved the Comprehensive Economic Development Plan, so that we could start gathering momentum towards increasing and developing economic opportunities,” said Eve Hemby, community organizer for the People for a

Better Aurora/Richland Township. “This is a part of rebuilding the community. … Little by little, you know, we’re establishing a momentum.”

Hemby said youth in Aurora who want to play baseball or softball in a league have to go to Chocowinity or Pamlico County. Having a ballpark right at home can give children something to do and help them stay out of trouble, she said.

The ballpark’s last upgrade was in the 1970s, according to Hemby. 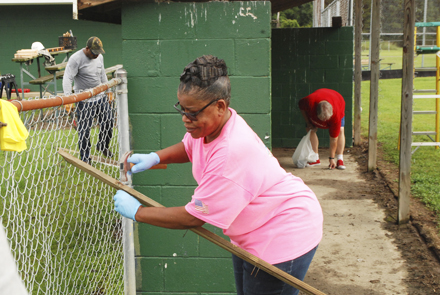 HELPING OUT: E.C. Peed worked to break down part of an old dugout Saturday at the Aurora Recreation Complex.

In the late 1970s and 1980s, weekends on the ball field in Aurora were the norm for their family. They grew up there, and the place holds many special memories.

“I played on one team, he played on a separate team, and our father coached a whole other team, so Saturdays were spent at the ball field,” Toler recalled. “A lot of the young boys here in Aurora know my father because he coached them. He kind of had the team that nobody really wanted. When they picked teams, and you know, those kids were left out, he’d take those kids.”

Hollister said it meant a lot for them to come back and help revitalize the park, as he has grandchildren who could play on the field when they’re older.

Once the new park is up to code, Hemby said the town hopes to become league eligible, and a new, full-time position within the Recreation Department could be added to maintain such projects.

“What we’re trying to do is encourage economic development in our community. You know, as much as people would like to say we don’t have, there’s a lot that we do have,” Hemby said. “It builds character education, and that’s what we’re aiming for back here. The bigger picture of this is now we have youth coming in and being accepted and finding their place in society as good citizens.”

The community is invited to another “Rebuild a Baseball Field” Day on Saturday, from 7-10 a.m. at the Aurora Recreation Complex. For more information about ongoing projects, visit growaurora.org. 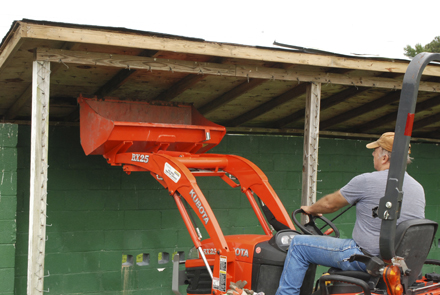 DETACH: Steve Gelsie brought his construction expertise to the ballpark Saturday, using a backhoe to detach a dugout’s old roof. 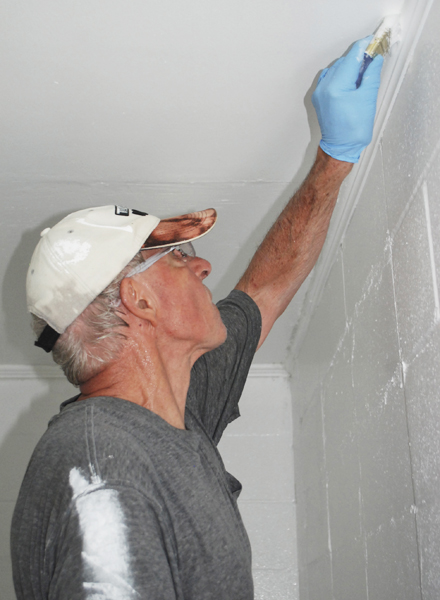 CLEANING UP: Some of Saturday’s cleanup projects included removing an old fence, tearing down old dugouts and painting the concessions and bathroom areas. 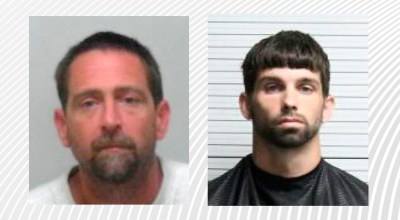