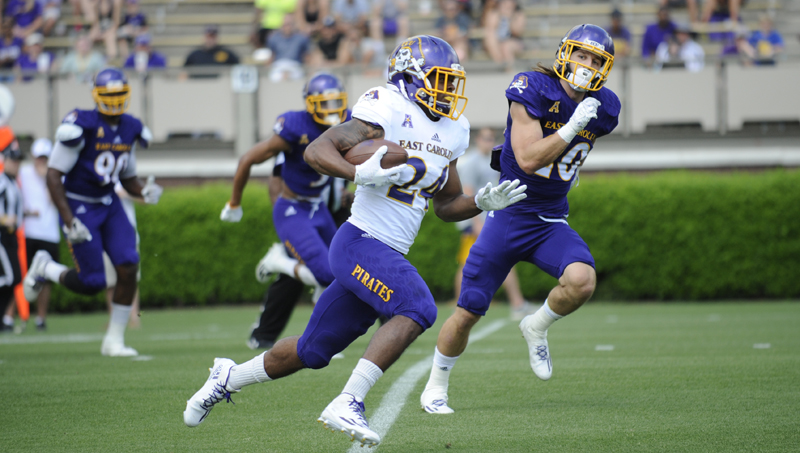 Defenders race to try and keep up with running back Derrell Scott during ECU’s spring scrimmage. The Havelock product has worked hard to get his body to the prime condition it’s in going into this season.

GREENVILLE — Even with a strong receiving core early on, East Carolina offensive coordinator Tony Petersen continues to focus on the Pirates’ ability to run the ball this season. He says that is what really makes a great team on offense.

“We do (have a pass-heavy offense), but we’ve got to be able to run the ball more,” Petersen said. “I love throwing it. I’m a quarterback, but when I’ve been a part of great teams, championship teams, we’ve been able to run the football.”

James Summers led ECU in carries last year, but someone this year will have to take on that role after the graduation of the offensive Swiss knife. Someone who hoped to fill that role was Havelock product and Tennessee transfer Derrell Scott.

Head coach Scottie Montgomery told Scott to spend his time off the field preparing himself physically, and he did just that.

“I really just wanted to be the best player I possibly could be,” Scott said. “Coach Montgomery, he talked to me a lot this offseason. We had some good talks. He just told me he wanted me to work on my body, and do little things that he thought would help me become a better player.”

Scott saw this as an opportunity to prove himself, and once he stepped back on the field it was clear he took Montgomery’s advice to heart.

“Derrell Scott has done a great job just from last year to this year,” Petersen said. “I’m very excited about him. And what he’s done with his body, it’s helped him. It’s got him back to where he was coming out of high school.”

Last season, the Pirates seemed to be plagued with turnovers, most of which came from the running back position. Several giveaways came in the red zone. In most cases, if that drive ended in points rather than loss of possession, some games might have had a different outcome.

So now the ECU coaching staff is really looking for ball security from the team this year. Montgomery said during media day that, in most cases, when a team has as many turnovers last season as ECU, it typically experiences a “bounce back” season.

All eyes have been on two veterans carrying the ball this preseason: Clemson transfer Tyshon Dye and Scott. It will be up to them to hold onto the ball come Saturdays.

“The kind of people that have separated themselves at the running back position would be Derrell and Tyshon,” Montgomery said. “Derrell, knock on wood, has been the best at ball security, since we put a big emphasis on it. He has been the guy that has been most consistent.”

Even with all of the pressure to improve on ball security, and to prove himself as a player Scott, says he is ready to take on the challenge and do what he can to make the team great this season.

“When you have great players in front of you, like these offensive lineman, they make my job a lot easier,” Scott said. “That’s the first thing they always tell you, is ball security. If you can’t hold onto the ball then you can’t play, so that’s the most important thing to me.”