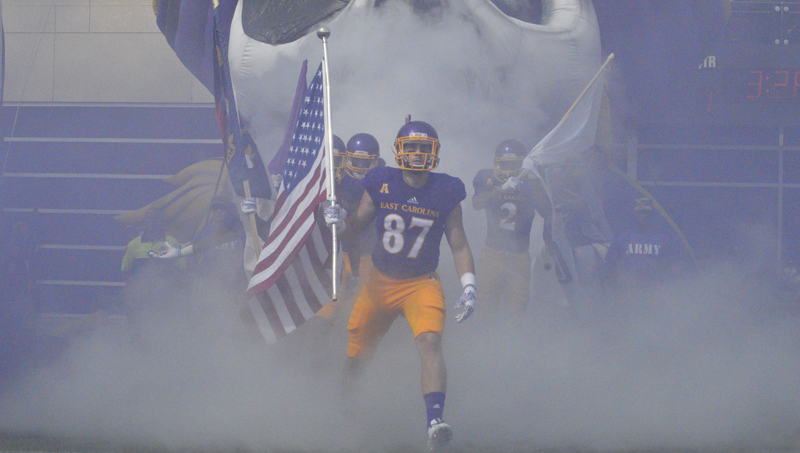 The Pirates make their way through the smoke and enter Dowdy-Ficklen Stadium for a clash against Central Florida last season.

GREENVILLE — On Saturday, Dowdy-Ficklen Stadium will return to life as thousands of fans pile into the seats to see East Carolina face James Madison in the season opener.

The biggest threat for the Pirates on game day is going to be JMU’s quarterback, Bryan Schor. The senior led his team to the FCS national championship last year, where the Dukes beat Yougstown state 28-14. In the 14-1 2016 season, Schor threw for more than 3,000 yards and 29 touchdowns.

“Offensively, we have talked about their 47.0 points a game and it all starts with the quarterback,” said head coach Scottie Montgomery. “He’s as accurate as we have seen. What I really like about him is he has the ability to stay in his fakes a lot longer than other because of his quickness and release.”

Although the Pirates will have to find a way to control the amount that Schor throws on Saturday, they will also have to take his legs into consideration. Last year he rushed for a total of 569 yards and 10 touchdowns.

“He places the football with accuracy, can hurt you in the run game, which gives them another number in the run game,” Montgomery said. “So we have a serious challenge there. But all in all, we talk about a really good football team that is getting better.”

On the other side of the ball, the Dukes have a solid defense returning. That unit ended hot after starting slow. They closed 2016 with a nation-leading and program-best 21 interceptions, and ranked fifth in turnovers gained with 30.

“In their front, I think they are as experienced on defense as a team we will see coming in this year,” Montgomery said. “We are focused on making sure that today we do what we have to do to be prepared to go against them on defense.”

As the No. 1 ranked team by Lindy’s Sports Magazine prepares to step onto Bagwell Field Saturday, it will be up to this year’s team captains — Gardener Minshew, Jimmy Williams, Garrett McGhin, Bobby Fulp and Jordan Williams — to step up for ECU.

The Pirates’ offensive line will have to stay strong from start to finish against a tough defensive line. It will be crucial in giving Minshew, who goes into his first season opener as a starter, the pocket he needs. The line will also be necessary in protecting the quarterback, which was an area of concern last year.

Although Zay Jones is out of the picture for the 2017 season, the ECU receiving corps has stepped up to the plate. Washington native and senior Pirate Jimmy Williams and mainstay Quay Johnson give Minshew familiar targets. Montgomery also announced Wednesday that dynamic wideout Trevon Brown has be released to play and will see the field Saturday.

“We’re planning on playing (Brown) on Saturday,” Montgomery said. “There’s no question about it.”

It will remain to be seen how much action Brown sees after recovering from the neck injury that shelved him in the spring and for all of the preseason camp. Having him on the field gives the Pirates another explosive weapon in an already formidable passing game.