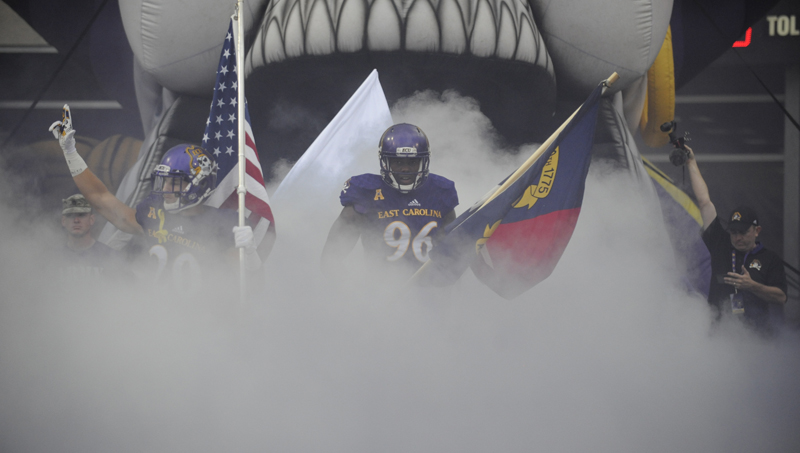 Senior defensive end and Greenville native Kiante Anderson leads the Pirates out of the tunnel for their season opener two weeks ago.

GREENVILLE — Winless East Carolina and undefeated No. 16 Virginia Tech meet Saturday in Greenville for the latest addition to the Pirates’ unforgiving schedule.

The Pirates and Hokies have had a storied rivalry, especially over the last few years. Shane Carden quarterbacked ECU to a win in Blacksburg, Virginia in 2014. The next year, it was James Summer trampling the Atlantic Coast Conference foe into the muddy terrain in Dowdy-Ficklen Stadium.

“We don’t necessarily see ACC success or Virginia Tech success or any of that,” head coach Scottie Montgomery said. “What we see is a team that we need to get better and focus on us and that’s what we tried to do last night.”

So far this season, the Hokies’ defense has held its opponents to 24 points. Virginia Tech shutout Delaware last week in a 27-0 win. Redshirt freshman quarterback Josh Jackson leads the Hokie offense with 457 yards and three touchdowns. He’s also the top rusher with 19 carries for 120 yards and a touchdown, making him a dual threat.

“Offensively with Josh Jackson at quarterback, what they’ve done is given themselves a chance to use all their personnel, especially in the run game,” Montgomery said. “He does a good job of extending plays in the run game to create some late run-pass options.”

Jackson has several weapons on offense in senior Cam Phillips and freshman Sean Savoy at receiver. He also has an ensemble of capable running backs, including Travon McMillian, to hand the ball off to.

“At running back, Travon McMillian is a great runner.” Montgomery said. “They do a good job running inside zone. Also, they will use a counter in power to try and keep you off balance on defense.”

It is possible that the Pirates returning home for family weekend could play in their favor, but this VT offense will present a lot of troubles for the ECU defense. It struggled to contain the run against James Madison, and its secondary was torched by West Virginia last week.

The Hokies’ defense will be the biggest threat this weekend for ECU, however. Coordinator Bud Foster is among the smartest coaches in the entire nation. They are ranked 14th in red-zone defense and are coming off of a shutout last week. Last year’s meeting between Virginia Tech and ECU ended in a score, 54-17, similarl to the Pirates’ score against West Virginia last week, 56-20. Robert Prunty taking over for Kenwick Thompson as defensive coordinator may benefit ECU as it tries to simplify things.

ECU will have to watch out for linebacker Tremaine Edmunds. He led the team in tackles last week with 14 (six solo). Edmunds also picked up four tackles for a loss of 26 yards total, 1.5 sacks and one forced fumble. Defensive back Mook Reynolds and safety Terrell Edmunds will be a threat to the ECU offense as well as they collectively picked up 19 tackles and 2.5 sacks last week.

“One of the biggest things that I think you will see is a little bit of a different variance in the way we play in our fronts,” Montgomery said. “Also, we will play a little bit closer to a 4-2-5 than always having the guys shooting in the box, in-and-out of the box. We have to be able to settle down guys and knowing exactly which gaps they have.”

The Pirates will kick off at 3:30 p.m. Saturday in Dowdy-Ficklen Stadium as they attempt to give VT its first loss and pick up their first win of the season.