Pirates still left with plenty of goals to accomplish 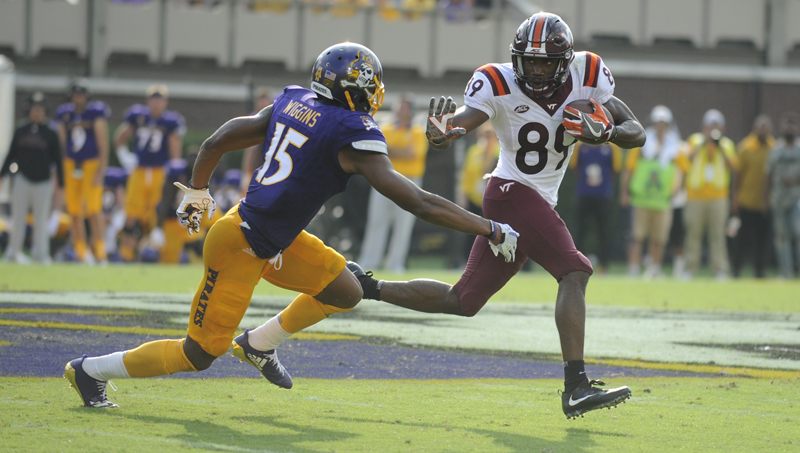 GREENVILLE — As East Carolina falls to 0-3 after a 64-17 loss against Virginia Tech, the players and coaches are all looking toward the American Athletic Conference play that will kick off this Sunday against Connecticut to clear the slate.

Eyes are set on the goals that are still left to accomplish. The Pirates have seen some of the region’s top football teams. They hope that’s prepared them for what is ahead in conference competition.

“I think we just have to continue doing what we’re doing. We’re getting ready to go into conference play, and no heads look down low. We just try to stay positive,” running back Tyshon Dye said. “We know we got big things coming up ahead, and we’re just going to continue working hard. This game is over. There’s no looking back in the past. It’s time to enter conference play, and I think we’re going to do what we have to do.”

In a game where the Pirates were considered the underdogs, they came out strong to strike first on the scoreboard — something they had failed to do in their first two games. With quarterback Thomas Sirk still recovering from a concussion from last week’s game at West Virginia, Gardner Minshew stepped up and threw a touchdown pass on the first drive to Davon Grayson.

Minshew would continue to impress as he launched a 76-yard bomb to Trevon Brown for the second touchdown of the game and a 14-7 lead. Then the ECU defense began to thrive as they managed to hold the young VT quarterback Josh Jackson to no points on the Hokies’ second drive.

These are the things ECU must carry into conference play if it hopes to improve. Although the Pirates have yet to win a game, it does not seal their fate. Conference success can still lead second-year head coach Scottie Montgomery to a positive record and possibly a bowl game.

“We are really excited to start conference play. I couldn’t be more excited,” Montgomery said. “The things that we’ve been through to get us to this point, I think will show to be really great preparation tools moving forward.”

ECU will split the AAC games with four at home and four away, and home field advantage will play a big role in the Pirates’ success. The Dowdy-Ficklen Stadium crowd was electric as the Pirates thrived early on.

After Connecticut looms a home meeting with South Florida, which was pegged to be the best team in the division. The Pirates will find a sense of comfort playing at home — that is if the fans stand by the Pirates even if the game starts to go south.

“In the first half, you look out there and it was a packed house,” said Trevon Brown after Saturday’s game. “But once we started getting down I felt like people stopped believing in us. So, the crowd started getting low. It’s like the air out of the stadium just left.”

In two weeks, ECU will return to Greenville for its second conference game of the season after traveling to face Connecticut. It is time for a new mentality to start for the Pirates as they will try to move past these few games of being highly outscored.

“That’s definitely what we’re looking forward to, conference play,” Jordan Williams said. “Just play the next game, and learn from our mistakes from this (Virginia Tech) game.”