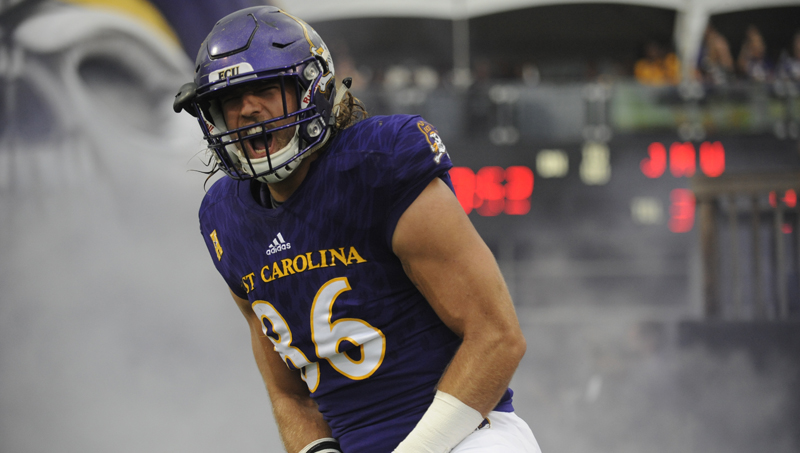 Tight end Steve Baggett is excited as he comes out of the tunnel for ECU’s season opener.

EAST HARTFORD, Conn. (AP) — Thomas Sirk threw for 426 yards and three touchdowns, and East Carolina held off UConn 41-38 on Sunday in the conference opener for both teams.

UConn drove to the Pirate 15 with six seconds left in the game, but Michael Tarbutt missed a potential game-tying field goal as time expired.

Sirk, a graduate transfer from Duke, connected receiver Davon Grayson for 223 yards and scores of 17, 24 and 75 yards. They also teamed up on a 46-yard flea-flicker to set up another score.

Bryant Shirreffs passed for 406 yards and three TDs for UConn (1-2). Running back Arkeel Newsome caught eight balls for 170 yards and a score.

Each team racked up 596 yards of offense.

East Carolina found the end zone on its first three drives, and put up points the first five times it had the ball.

But, the Huskies scored the next 17 points, cutting the deficit to three on a screen pass to Newsome that went for 79 yards and a touchdown with just under six minutes left.

The game was rescheduled from November as part of the conference’s shuffling to make up games lost to Hurricane Irma.