Stepping Up: ECU left with no time to celebrate first win 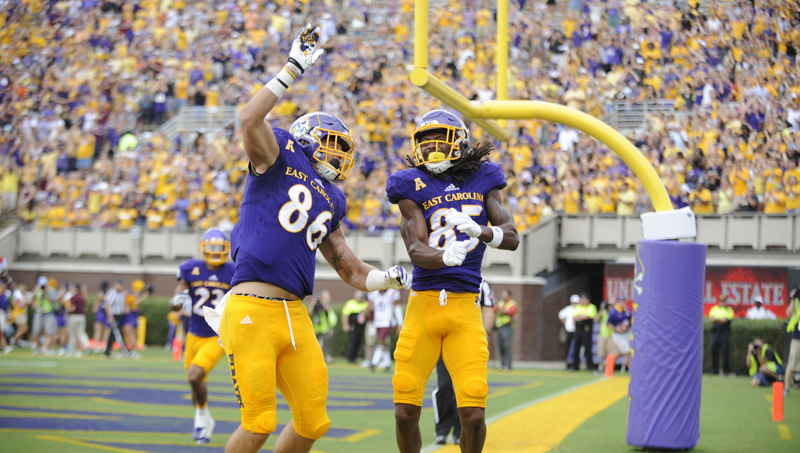 Steve Baggett and Davon Grayson celebrate a touchdown in the first quarter against Virginia Tech. Grayson caught three touchdowns in a 41-38 win over Connecticut.

Mike Tarbutt’s short field goal would have tied the game, but his miss let East Carolina hang on for a 41-38 win at Connecticut on Sunday. It was the team’s first win in 11 months and snapped a seven-game losing streak away from home.

Fans can get excited about the remainder of the season, but they may want to tread carefully. There is still much work to be done.

Many people were probably excited to see what the Pirates would do inside the conference when they took on the Huskies in their American Athletic Conference opener. The odd Sunday matchup brought on by the fallout of Hurricane Irma was more favorable to ECU than beginning its league slate against South Florida.

ECU finally broke out of the 20 points or less trend it had fallen into this season with 41 points over UConn. As impressive as the Pirates continuing to hit their stride on defense is, they’re still fielding the worst defense in college football.

Thomas Sirk returned after being placed under concussion protocol at West Virginia. He completed 30-of-39 passes for 426 yards and three touchdowns — a career best for the Duke graduate transfer.

All three touchdowns came from the connection that the former Blue Devil quarterback made with Davon Grayson, who led in receptions Sunday with 11 for 223 yards. The Pirates’ run game seemed to start to come to life as they rushed for 181 yards and two touchdowns.

But all of this offensive success still came against a poor UConn defense, which after Sunday’s game is ranked 126 out of 129, with ECU sitting in dead last. The ECU offense will have a much tougher time in its next matchup against No. 18 South Florida. The Bulls are No. 13 in total defense.

Although not ranked as high as the defense, the USF offense sits at No. 21 for total offense, which will be the true test as to if this defense really is the worst in the nation.

After replacing their defensive coordinator, the Pirates have started to make positive strides on the defensive side of the ball. The defensive line has began to bring more pressure on the quarterback. The Pirates will still need to find a way to get their secondary to play tighter coverage on the receivers they face, as well as stopping the run-game. This has proved to be a weakness in the past, and teams will exploit that weakness until the Pirates prove themselves.

Offensively, the Pirates will need to pick up the run-game. Although it is getting better, the game cannot be won simply through the air as USF is ranked No. 1 in passes intercepted with 12 in just four games played.

ECU has a long road ahead. The Bulls rumble into Greenville with extra rest while the Pirates face a short week. Kicking off conference play with a win is helpful, but now it’s time to get back to work and focus on the games to come.

Stepping Up: Conference season provides hope for those that…