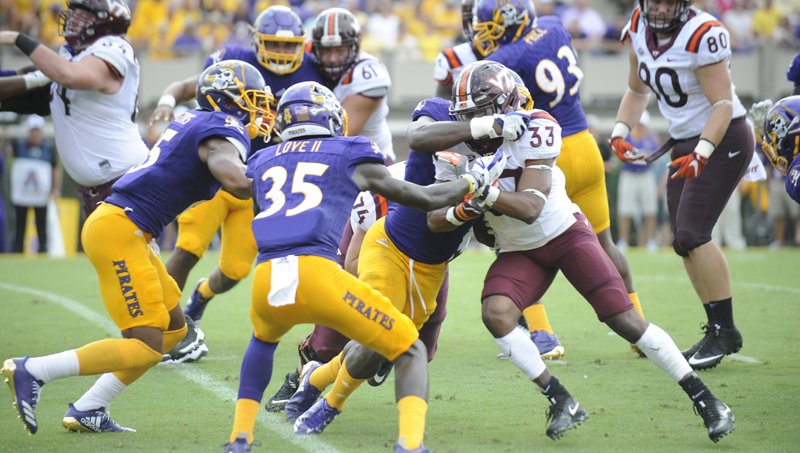 A host of ECU defenders converge on a Virginia Tech player when the Hokies visited Greenville two weeks ago.

GREENVILLE — East Carolina will return to Dowdy-Ficklen Stadium to face No. 18 South Florida six days after picking up its first win.

In this week’s matchup, the Pirates will find their biggest threat to be USF quarterback Quinton Flowers. Standing at 6-foot, 210 pounds, the senior will present trouble for the ECU defense.

Last season when the two teams last met, Flowers completed 21-of-29 passing attempts for 250 yards and three touchdowns. His biggest asset is his mobility, however. Flowers was the second leading rusher with 16 carries for 115 yards. Although he was unsuccessful in scoring while running the ball, he has improved immensely since last season with four rushing touchdowns so far this season.

“On offense, they are led by of course their quarterback, Quinton Flowers, who can run it, can throw it, has the ability to be very elusive in the pocket and causes people all kinds of trouble,” Montgomery said. “He’s been a really good football player down there for them and in the back field standing right beside him you’ll have (D’Ernest) Johnson or (Darius) Tice.”

Flowers, who can make plenty of plays on his own, has a bevy of weapons around him. The ECU defense will have to maintain both Johnson and Tice in the run-game. The senior running backs have combined for a total of 694 yards and eight touchdowns in just four games this season.

“It’s a struggle trying to get all those guys stopped in the run game. As you can see, they’re doing some things better now than they’ve ever done them,” Montgomery said. “I think that the reason why they are so good in their run game is the athletic ability of the offensive line.

“I think they’ve done a good job on the left and right side of the line getting these guys a lot of running lanes so when they do get a chance to get down the field you are watching some really, really athletic people in the run game.”

Although not as impressive as No. 9 rushing offense in the country, the passing game has proved to be effective in the Bulls’ games this season. Flowers has picked up almost 800 yards and eight touchdowns with the help of receivers Marquez Scantling and Tyre McCants.

That South Florida offense will go up against a Pirate group ranked dead last in total defense. The ECU offense will have to continue putting the ball in the hands of play makers such as Trevon Brown, and finding a way to get senior Jimmy Williams the ball more. The former Washington quarterback was absent from the Connecticut game because of injury.

Overall, the Pirates will have an advantage of playing at home and coming in after their first road win under Montgomery. The American Athletic Conference matchup is set to kickoff at noon Saturday, as the Pirates attempt to add the first loss to the Bulls’ record.