ECU looks to improve on 2016 with second AAC win 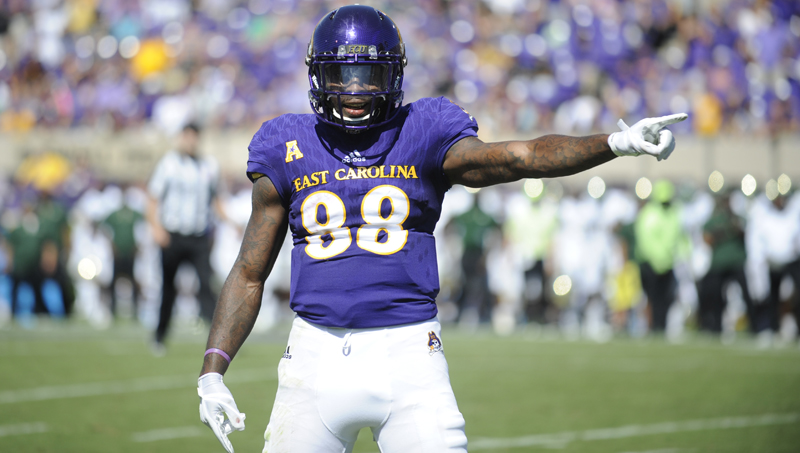 GREENVILLE — After falling to No. 18 South Florida, East Carolina (1-4, 1-1 AAC) will continue into American Athletic Conference play as it hosts the Temple Owls (2-3, 0-2 AAC) this Saturday. The goal will be to pick up a win that would improve on its one-win showing in the conference a year ago.

The Pirates showed promise despite a 30-point loss. The offense came to life more than it has all season. Quarterback Thomas Sirk took control of the game, as he was plenty mobile, giving the offense more options in tough situations.

“We put up a fight until late in the third quarter and we were competitive in the game,” head coach Scottie Montgomery said. “I saw it from a lot of people, but after that we have got to make sure that everybody is competing at the same level that some of the guys I’m going to talk about competed at.”

So far this season, the only similar opponent that ECU and Temple have faced is USF. If the performance against the AAC opponent says anything about how Saturday’s game will play out, it looks much more promising for the Pirates. While both teams lost to the Bulls, it was ECU that kept the game closer throughout.

This weekend the Pirates will need to be aware of Temple quarterback Logan Marchi. He is not mobile like quarterbacks ECU has seen throughout the season, so bringing pressure and forcing passes will help the Pirates stay in control of the game.

The Owls turned the ball over six times in their 43-7 loss to the Bulls. They failed to score an offensive touchdown as their lone points came on Jacob Martin’s 44-yard fumble return just before halftime.

Temple’s defense has proven itself up front this season. There’s also plenty of talent in the secondary. Sean Chandler and Delvon Randall combine for 68 tackles and a sack in the Owls’ five games this season. Neither has shied away from coming down to add pressure.

Sirk will have to stay aware of his surroundings and get the ball out quickly. If he begins to get to comfortable in the pocket, it could lead to sacks or even interceptions with defenders in his face.

“Defensively, they’re very physical up front. They have guys that can run in the back end (Chandler) and (Randall) — both are great open field tacklers,” Montgomery said. “They did have some graduation on defense that definitely changed their team a little bit, but they still have the same physical toughness that they had last year.”

As the Pirates prepare for the conference matchup, they will need to continue putting the ball in the hands of the playmakers that have proved themselves so far.

ECU will also need to continue getting young guys involved who have shown promise such as freshman running back Darius Pinnix. Although he has only rushed for 31 yards, Pinnix is another weapon and an effective blocker for Sirk’s designed runs.

“We are going to see a lot more of (Pinnix). He had a lot more plays in this last game than he had the week before,” Montgomery said. “His mental errors were down in practice and he is carrying the ball great in practice.”

Saturday’s game will be a true sign of how the rest of the season will unfold. If ECU can pick up another conference win before heading down to Florida to face No. 25 Central Florida, it will help to build momentum in the rest of the games to come.

Kick off in Dowdy-Ficklen Stadium is set for noon on Saturday.