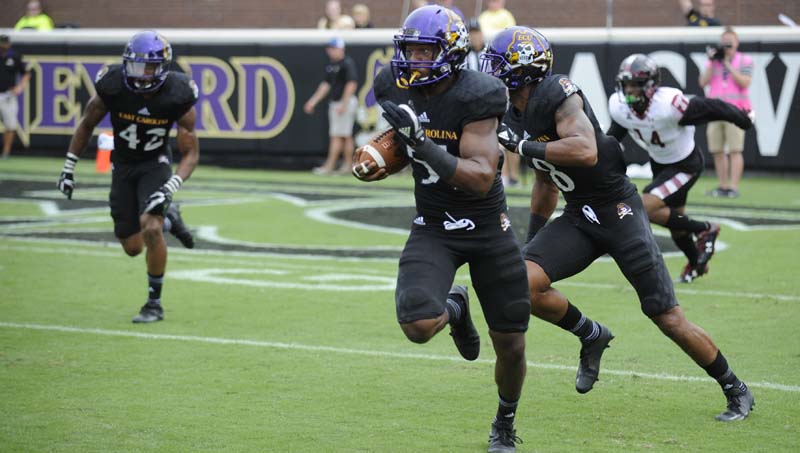 Freshman linebacker Aaron Ramseur comes up with an interception near the Pirate goal line and takes off on a return.

GREENVILLE — After redshirting last year for his first season at East Carolina, Aaron Ramseur has become a bright spot for an otherwise bleak Pirate defense this season.

Ramseur made his first collegiate start last weekend against Temple. He didn’t fail to impress. The linebacker was the leading tackler and had a red-zone interception. While most defensive players typically let the play end after an interception, Ramseur embraced his inner offensive player as he picked up 31 yards.

“It was my first interception in collegiate football and I mean it was exciting, but the most exciting part was helping the offense get good field position,” Ramseur said. “We’ve been struggling on turnovers, so getting one early in the game when they were in the red zone was a really big step for the rest of the game.”

Ramseur is a Shelby native and played his high-school ball at Crest. He is one of 10 children to Kenneth and Minnie Ramseur, and the youngest of six brothers.

At Crest, Ramseur assisted his team in back-to-back 16-0 seasons and two state titles. He picked up a total of 258 tackles, 11 sacks, six forced fumbles and notched two interceptions. If his high-school play is any sign of what is to come in the future, ECU has found a linebacker to fill the void senior Jordan Williams will leave.

“I feel like I’m growing every day with the older guys Jordan, Cannon (Gibbs) — two very smart guys that know exactly what they’re doing,” Ramseur said. “And just me watching them, especially in the spring just coming up watching them, it helps me to grow as a person. I’ve been around them, and growing stronger mentally for football.”

Ramseur started catching some attention in the spring as he registered four tackles and a 47-yard fumble return for a touchdown in the first scrimmage. He went on to pick up a few more stops, including a 3-yard loss in the spring.

Since stepping on the field, he has started to slowly stand out on the defensive side of the ball. He started with just one tackle on the road against West Virginia before returning home against South Florida to pick up five more.

The defense has undergone several changes, however. ECU relieved its defensive coordinator, Kenwick Thompson, earlier this season, and assigned Robert Prunty to the role.

“I think it’s more mental then physical,” Ramseur said about the changes. “I mean of course everything is a little bit faster, and everybody’s smarter, but that’s the only thing. We just have to have the mental part.”

Ramseur will look to continue his defensive success this Saturday, as the Pirates travel to No. 22 Central Florida in an attempt to pick up a second conference win.

“I believe (my success) helps me mentally to push myself, and say, ‘it’s OK and we can go against UCF. And we can do this and we can win,’” Ramseur said.